Update: This feature is now available! Check out the latest release of Tableau.

Tableau 2018.2 is currently in Beta and on its list of great features is Dashboard Extensions. Dashboard Extensions are custom dashboard zones that enable new dashboard functionality and integration with other applications via the Tableau interface. Internal developers and technology partners can build Extensions using the Extensions API, but any Tableau Creator or Explorer can add Extensions to their dashboards without writing a single line of code.

Adding an Extension to your dashboard could not be easier. In Desktop and web authoring, just drag the Extension object from the Objects pane to anywhere on your dashboard in the same way you add a Sheet or any other object. 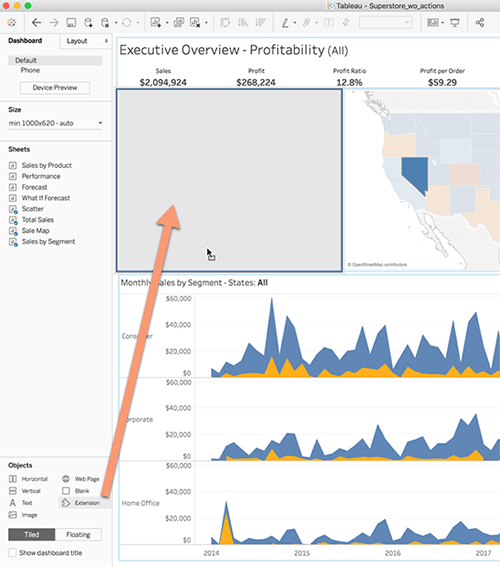 The possible use cases for Extensions are limited only by the imaginations of people who learn how to use the Extensions API, but the most common use cases serve interacting with your data in new ways and integrating with external systems. Here are a few great examples built by our partners.

Let’s start with a simple example of interacting with your data in new ways. One common use of Tableau dashboards is to monitor ever-changing data. And, if your dashboard points at data that is changing regularly, you want the dashboard to refresh regularly. This means you have to continuously click the refresh button or use some other kind of workaround.

Our friends at Starschema, Inc. recognize this and built an Extension that refreshes your data on a timer. 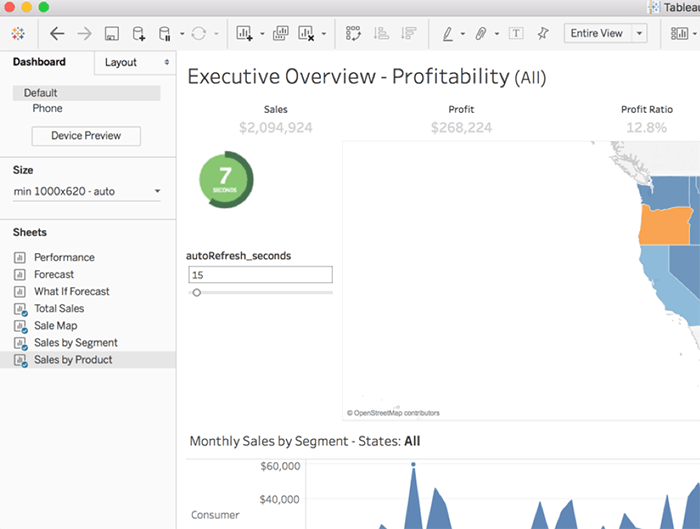 In the image above, I’ve added Starschema’s autorefresh.trex to the dashboard. The extension is counting down to 0 when it will refresh all of the data sources associated with the dashboard. And, because the Extensions API can query my dashboard’s parameters, I can configure the refresh time with a native Tableau parameter! This is a simple example of what is possible when creative partners are able to do things like refresh and query parameters with an API.

Narratives for Tableau by Narrative Science

Narrative Science is an artificial intelligence company that specializes in Natural Language Generation. Their technology is able to interpret your data and transform it into insightful, natural language “narratives” that help you find new insights from your dashboards. 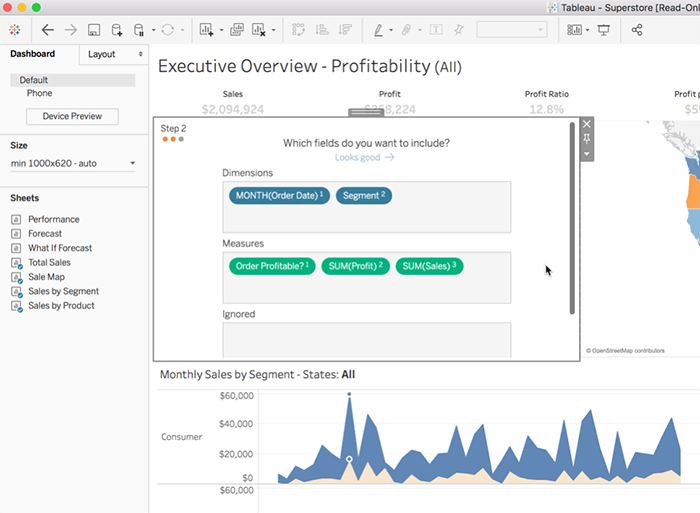 After adding the Narratives for Tableau Extension to a dashboard, I can choose which dimensions should be used for the generated narratives. Once I configure my preferences for the narrative, data is sent to Narrative Science’s Natural Language Generation engine and then displayed in an easy-to-digest format: 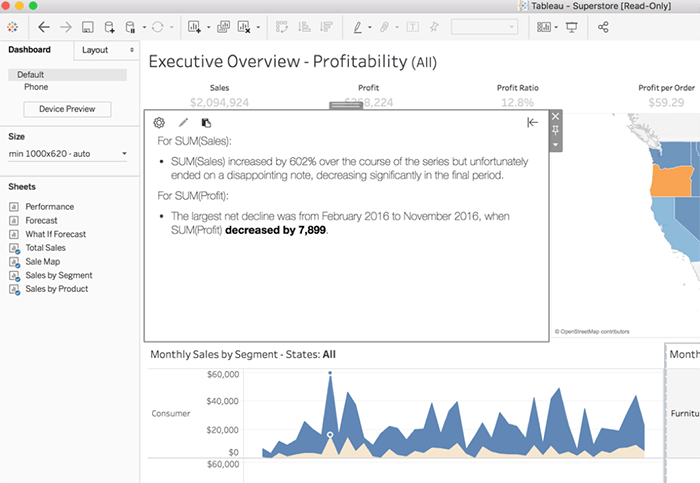 And, because the Extensions API can “listen” to user interactions, the narrative will update as I filter and select marks: 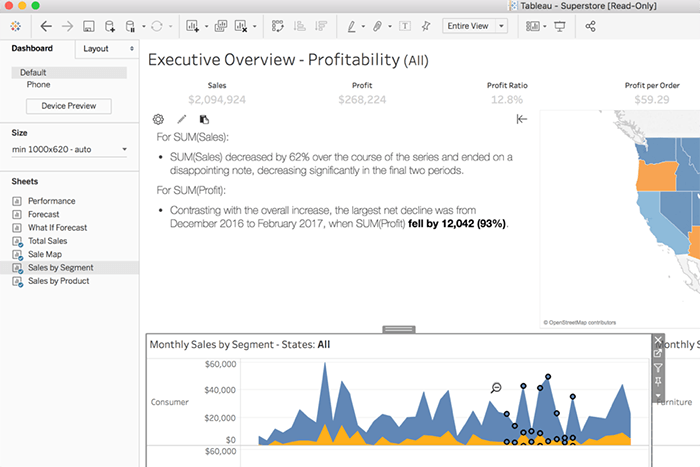 These two Extensions will take your dashboards to the next level, but they only scratch the surface of what is possible with Dashboard Extensions. We are also working with Frontline Systems, a vendor of optimization software; Automated Insights, experts in Natural Language Generation; Infotopics, a Tableau partner with a variety of awesome Extensions; K4 Analytics, bringing writeback and P&L to Tableau; and The Information Lab, a Tableau Gold partner. These partners are already wowing us with creative Extensions ideas and creating new possibilities with Tableau dashboards, and we are excited to see what else will be built.

Peace of mind for IT

For all of our friends in Enterprise IT departments, we know what you’re thinking: “Extensions sound great, but I want to manage which ones are allowed to run on Tableau Server or Online”. Don’t worry, we have added a new set of Server and site settings that allow you to decide which Extensions can run. 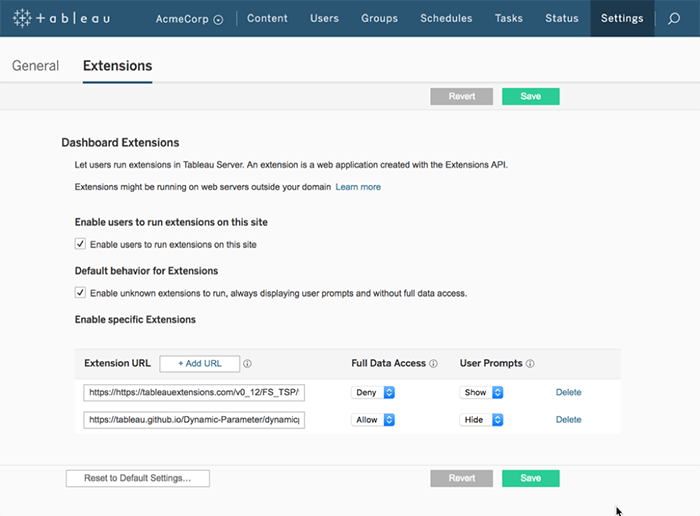 At the site level, admins can specify which Extensions are allowed to run, whether the Extension has full data access, and if users are prompted before the Extension executes. 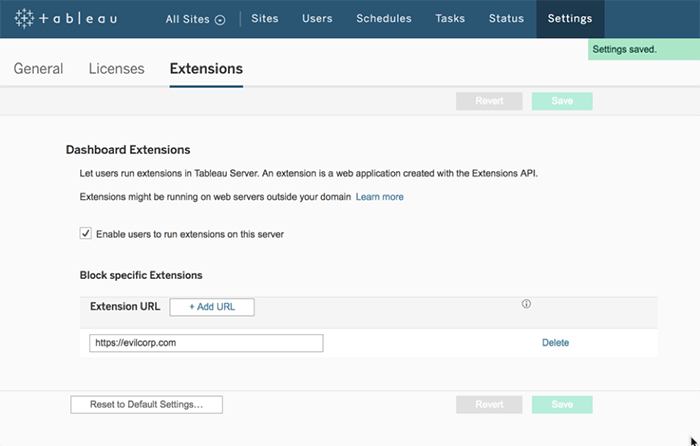 At the Server level, admins can block specific Extensions from running on any site.

Extensions can also be completely turned off at both the Server and the site levels, so admins have full control.

The mission of the Developer Platform team at Tableau is to unleash the creativity of third-party developers so that they can bring new functionality to Tableau users. We have been working hard to bring that power all the way into heart of Tableau, and we are excited to find out what new use cases Dashboard Extensions enable for you!

Learn more about other 2018.2 features, or join our pre-release community to test and provide feedback on the latest Tableau product developments.