Finding the vizzes you care about on Tableau Server and Tableau Online just got easier. View Recommendations are personalized suggestions that instantly connect you to relevant data and content on your site. Powered by machine learning, these recommendations match preferences between users, surfacing content that others like you have found interesting or useful, including what's most popular and recent. Bringing trending views front and center also helps new users to quickly find valuable content. You can find recommendations in a dedicated section on your Tableau homepage, as well as a separate Recommendations page accessible from the left navigation menu. 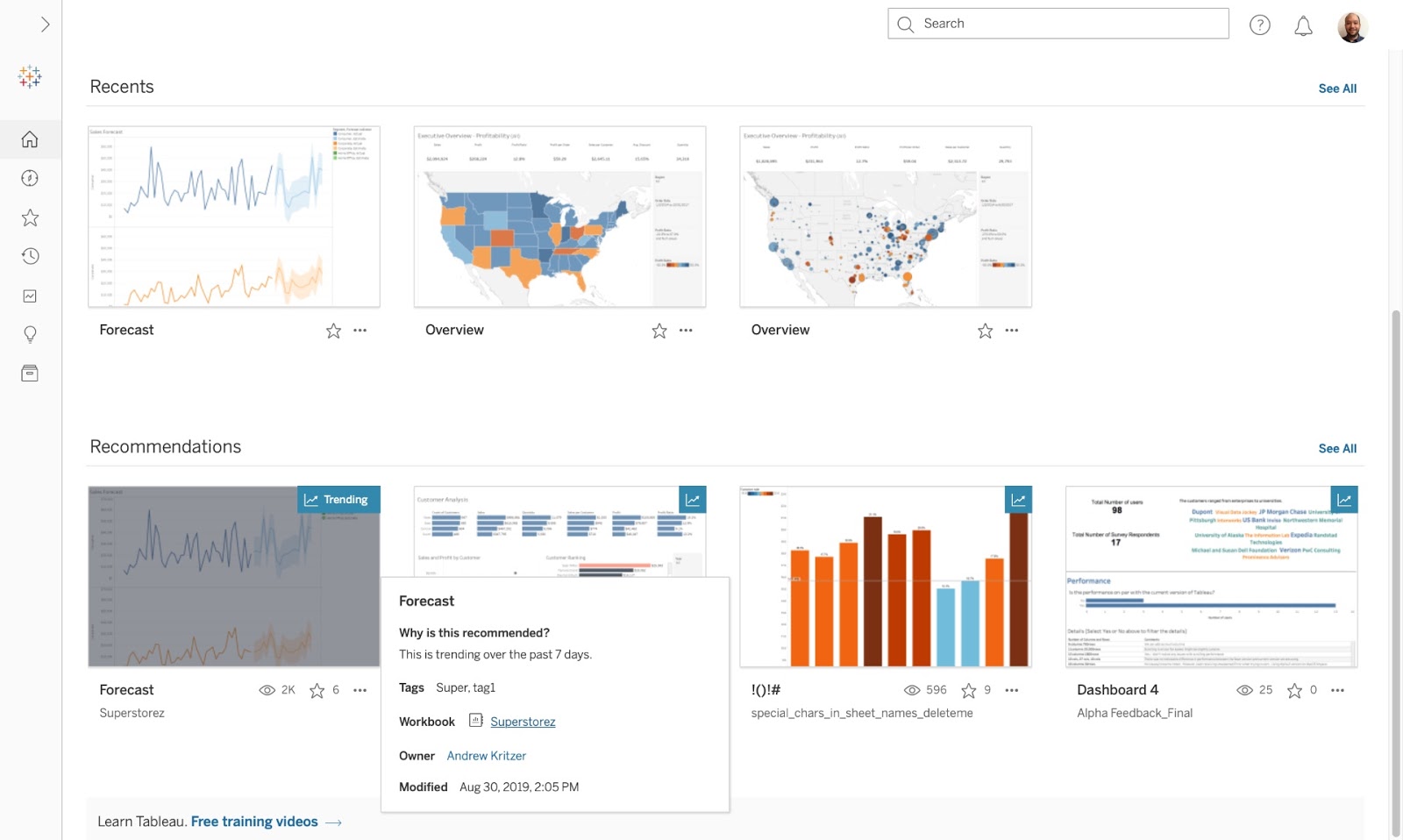 You asked, and we heard you loud and clear! We know that you use tables in your analysis for meeting a variety of business needs. In 2019.4, we’re making it easier to view and edit wide tables across sheets, dashboards, and stories with the following enhancements: 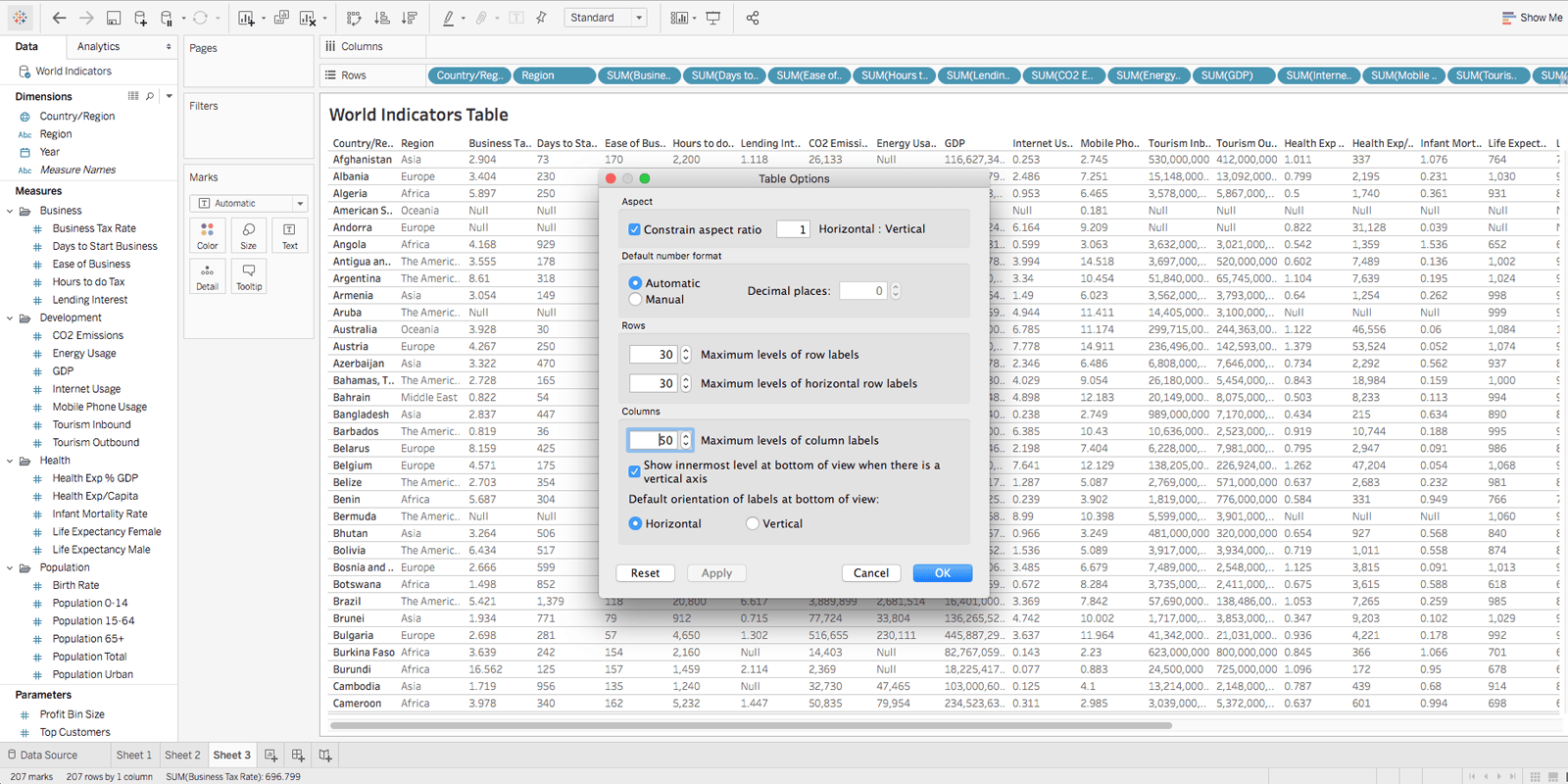 Calling all developers—we’re excited to introduce Webhooks support in 2019.4 to make it easier to integrate Tableau with other applications. With Webhooks, you can now build automated workflows that are triggered by events as they happen in Tableau Server and Online. In other words, a server or site admin can build a workflow that tells Tableau to send a message when a certain event happens. The system that receives the message can then process it and take further action.

For example, when an extract refresh in your Tableau workbook fails, you can trigger filing a ServiceNow ticket automatically. Or, when a workbook is published, trigger a notification or a confetti emoji in your team’s Slack channel. The possibilities are endless! You can build Webhooks off various events in Tableau such as Workbook and Data Source status changes.

Sign up for the Tableau Developer Program and check out the Webhooks documentation and samples to learn more and get started.

Connect to, prep, and analyze even more data with new Desktop and Prep connectors

And for customers who have data in the Alibaba Cloud—with the new Alibaba connectors in 2019.4, you can now natively connect and analyze data in MaxCompute, AnalyticDB, and Data Lake Analytics.

Also accompanying this release is Tableau Prep Builder 2019.4.1. We’re introducing brand-new cloud connectors to Dropbox, Google Drive, OneDrive, and Box. This means you can connect to a new category of input files coming from cloud files and prepare an even more diverse set of data.

Authentication for these cloud connectors is similar to how you authenticate using Tableau Desktop. Only embedding credentials is supported, so when publishing a flow to Tableau Server or Tableau Online, make sure you have your saved credentials set up on your Account Settings page.

Tableau Mobile uses long-lived authentication tokens allowing users to remain signed in, giving them frictionless access to data. However, admins within organizations might have concerns about this easy access to data via the app. Rather than requiring users to sign in more frequently, admins can now enable app lock to give users a secure, yet simple way to access content.

Once the setting is enabled, users who are signed in will be required to set up a method to unlock their device using the supported biometrics (Face ID or Touch ID on iOS and fingerprint on Android) or alternatively, a device passcode. If users fail to unlock the app after a certain number of attempts using a biometric method, or if their devices are not configured for biometrics, they will be prompted to unlock using an alternative method such as a passcode or log out of Tableau.

These are just a few highlights from 2019.4. Check out tableau.com/new-features to learn more.

We can’t do this without you so thank you for your continued feedback and inspiration. Check out the Ideas forum in the community to see all of the features that have been incorporated thanks to your voices.

We’d also like to extend thanks to the many testers who tried out Tableau 2019.4 in beta. We appreciate your time and energy to help make this release successful.

Get the newest version of Tableau today, and if you’d like to be involved in future beta programs, please sign up to participate!

Michael Hetrick December 19, 2022
Tableau 2022.4 has arrived, delivering innovations that make it even easier for analysts and business users to uncover insights.