The Seattle Sounders are having the best year in Major League Soccer. Not only does the team have the best record in MLS, but they have far and away the best attendance by fans of any MLS club. To top it off, the squad sent two players, Clint Dempsey and DeAndre Yedlin, to join the U.S. Men’s National Team to compete at the World Cup in Brazil.

Building the top MLS club isn’t easy. It takes commitment from great players, lots of practice, and top-of-the-line conditioning. And for the Sounders, data analytics played a key role.

Teams in all kinds of sports have used sports science to help condition their athletes, measure their performance, and keep them healthy. But with the advent of wearable technology and equipment like cameras that can track player’s speed and positions on the field, teams are generating more data than ever. That’s where Tableau comes in.

With Tableau, the Sounders are making this data accessible and easily understandable for the team’s performance managers and coaches. Their ultimate goal is to minimize the risk of injury and maintain performance throughout the team’s 90-plus minute matches. They do this by pulling data from a number of devices, including GPS trackers worn by players, vests that track physical data like heart rates, and even sleep monitors. 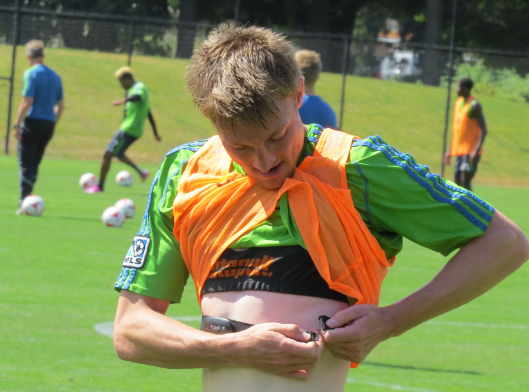 The Sounders’ coaches look at visualizations of players’ performance data to determine their readiness for the next match. Since soccer coaches aren’t data analysts, it’s important that they have visual dashboards that make it easy to see and understand volumes upon volumes of information at a glance. With this data, coaches can make decisions about the team’s practice schedules and even individual drills and workouts.

The Sounders completely redesigned their preseason training program based on data they analyzed using Tableau. And the team’s performance manager cites that, with an improved training and conditioning program, they’re simply outlasting their opponents and scoring more goals late in games.

The results speak for themselves. The Sounders are winning more matches, and keeping players healthier.

You can read more about the Sounders’ use of data, including interviews with Sounders’ performance manager and Tableau user, David Tenney, here:

GeekWire: How the Sounders use wearables to improve soccer player fitness, with help from Tableau

The Puget Sound Business Journal: How Tableau is helping the Sounders score GOOOOOOOAAAAALS