"Chuting" for Speed: A Dad's Quest for Answers

Share
Raif Majeed
November 25, 2007
Chutes and Ladders is a popular game in our family; it's great for evening "together time" without the need for deep strategizing. If you played the game as a kid, you probably enjoyed the back-and-forth of advancing up the board and then sliding back down. And if you ever played it as an adult, you've probably wondered when the game is going to end! I've got some answers and advice.

After about an hour and a half of one particularly tedious game, I realized that I could write a program to simulate Chutes and Ladders and answer the key question for parents: How long does a typical game take?

I figured I would write my own quick-and-dirty simulation, save the results of every move by every player in every game, and feed those results into Tableau's data visualization software to get the answers I wanted. Those of you who have used the Tableau Software product before won't be surprised to hear that I got much more information than I initially expected.

(By the way, I'll defer discussion of the technical details of Chutes and Ladders -- and my simulations of it -- to a second post.)

First, a quick recap of the game rules: The board has 100 squares; the first player to advance to square #100 is the winner. Normally players move 1-6 squares at a time, based on the result of spinning a spinner; but landing on certain squares forces the player to move upward (via a "ladder") or downward (via a "chute"). One other twist: if your "spin" takes you past the end of the board (eg you're on square #99 and you spin a 3), you have to stay where you are.

So after playing around with my game-simulation data in Tableau, here's what I found. First off:

To see why, take a look at the statistics that Tableau came up with, using data from 32,000 3-player game simulations. To get this result, I filtered out all moves except the ones that had endpoint 100 (the winning square), then took statistics on my database records.

The average game is about 20 moves -- much shorter than I expected. But the large standard deviation (~ 10 moves) shows that it's really difficult to talk about a "typical" game because they vary so widely. As a parent, it’s best to plan for the longer games and play it safe. About 95% of 3-player games will finish within 40 moves (mean + 2 SD’s).

To see more details on this, take a look at the histogram of game length -- that is, the number of games that took (n) turns, plotted against (n) -- which Tableau generated for me: 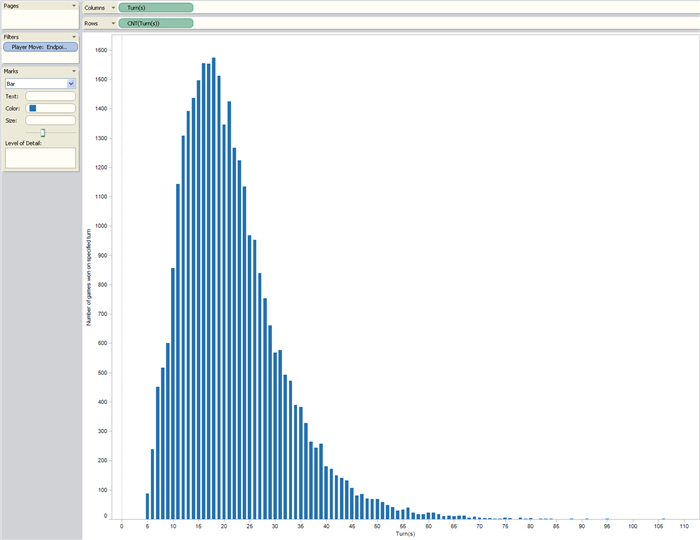 As you can see, there are a lot of relatively short games, but there's a nontrivial "tail" of rather long games. So to reinforce the point above:

So now we have an idea of how long it takes to win. That brings up another question: Who usually wins? Is there an advantage to going first? I’ll put it this way:

Why? Because there is a slight advantage to the first mover. Here's a plot of winning percentage for each player in a 3-player game:

Now that I had the information I wanted about game lengths and winners, I was curious about how the game (on average) evolves over time. Using the Pages shelf in Tableau is ideal for visualizing time-dependent processes like this. I used it to make a movie of the distribution of player position.

Here, each bar represents a square, and the height of the bar represents how likely it is for a player to be on that square. (Disclosure notice: I’ve used a moving average and filter to smooth the animation easier to interpret; it makes things a little smoother, but doesn’t change the conclusion.)

As you can see, this distribution actually reaches a sort of steady state. Even though players are moving back and forth across the board, the likelihood of a square being occupied (given that the game hasn’t ended yet) is fairly constant. Why does this happen? It’s an interesting linear-algebra question which I’ll leave for my next post.

My final advice for parents:

Like any interesting analysis, this brings up at least as many questions as it answers. What happens if you modify the board? What if you modify the rules? What if you add occasional random moves (representing accidental piece knockdowns or toddler intervention) – do positive and negative random events cancel out?

I'll talk about all that in my next post, as well as how this Chutes and Ladders simulation turned out to be related to software testing, conditional probabilities, Markov Chains, search-engine rankings, leaky water buckets, and other such things.

And as for the children in our family? Well, they're not sure why I did all this data analysis. They enjoyed watching the Pages shelf animation of Chutes and Ladders and asked me to play it many times. But now they're into Connect Four -- a much harder simulation!

If you'd like to play around with a smaller version of this data set, you can download the packaged workbook. You'll need Tableau Desktop 3.5 or higher, or the free Tableau Reader. Your views will look a little different and your statistics won’t be quite so clean – with the full data set the workbook would have been a 2 GB download.

How did you know I'm a doctor? You must have some inside information.... ;) But I have also made the experimental observation that older players tend to lose track of whose turn it is and that further enhances the younger player's chances of winning.

In modeling terms, I could imagine distractability being expressed as the probability of skipping a turn, and then running the Monte Carlo simulation with that factored in. So if a player is 40% distractable, then 40% of the time their "spinner" would return 0 instead of 1-6.

Trust me, dads are more distractable than aunts. In any case, you may be particularly interested to know that my "much younger player" is thrashing me at Old Maid nowadyas. There's another game where distraction is problematic.

Hmmm....it sounds to me like we've matched wits and skills with the same young, cunning opponent. Rumor on the streets has it that he's looking for another victim on whom to ply his Connect Four skills. I can attest that Connect Four is the one game that you must remain focused or suffer his victory dance.

How did you create the movie (http://www.tableausoftware.com/mkt/img/movie.swf) of player position? I can imagine doing this in a couple of ways including using a screen capture program such as hijack to capture the images as they are created using the pages shelf, or exporting a series of images and combining them into an .swf file to make the movie. Of course, there might be a very simple way of making a movie that I haven't discovered in Tableau!

Great question.... It's been a while, but I think I used Snagit (version 7 or 8) for this. I put the appropriate "time" field (in this case, the [Round] of the game) on the page shelf, turned on Snagit's video capture for the Tableau window, and pushed the "Play" button on the Pages card.

Being in QA, I have limited tolerance of software and don't have too many "favorite" programs, but Snagit is one of them -- not too far behind Tableau.  :)

Your comment brings up an interesting idea -- ability to export to something like an animated .gif.  If you don't mind I'll note that idea down for our future reference.

Thanks Ken!  Questions and feedback are always welcome.

Oh, and by the way, modeling Chutes and Ladders as a Markov process leads to a much nicer movie.... More on that coming soon.

Did you end up publishing the Markov model anywhere? I'd love to see it!