Why is NLP so hot? Deriving value from data through natural language

A version of this article originally appeared in ITProPortal.

Becoming data-driven is the new mantra in business. The consensus is that the most value can be achieved by getting the data in the hands of decision makers. However, this is only true if these data consumers know how to handle data. Getting managers to think like data scientists is one way to approach this challenge; another is to make data more approachable and more human. As such, it’s no surprise that natural language processing (NLP) is the talk of the data-driven town.

Emergence of a new type of language

When considering the next generation of digital user interaction, NLP might not be the first thing that comes to mind—it’s by no means a new concept or technology. As referenced on Wikipedia, NLP is a subfield of computer science, information engineering, and artificial intelligence (AI) concerned with the interactions between computers and human (natural) languages. In particular: how to program computers to process and analyze large amounts of natural language data.

Developments in the related disciplines of machine learning (ML) and AI are propelling the use of NLP forward. Industry leaders like Gartner have claimed conversational analytics as an emerging paradigm. This shift enables business professionals to explore their data, generate queries, and receive and act on insights using natural language—whether it be voice or text, through mobile devices, or personal assistants.

When facing strategic obstacles that can hinder innovation and muddy the decision-making process, such as organizational silos, Deloitte found that businesses with leaders who embody the characteristics of the Industry 4.0 persona “the Data-Driven Decisive” are overcoming these roadblocks through a methodical, data-driven approach and are often bolder in their decisions.

In order to effectively apply data throughout an organization, companies need to provide employees with a base-level understanding of the importance and role of data within their business. And, looking at the overwhelming demand to be met here, the challenge needs to be approached from both ends through education and tools.

Teaching employees how they can use data and which questions to ask will go some distance to establishing a group of data-capable individuals within the workforce. Giving them the effective media through which they can consume data exponentially increases the number of people that can “read” data (manipulate, analyze, and visualize it) in a way that allows them to make better decisions.

The aim is not to convert everyone into a data scientist. Data specialists will still be needed to do more forward-looking number crunching, and both groups might yield different solutions. Natural language processing as used in Tableau’s Ask Data solution mainly aims to lower the bar for all the non-data experts to use data to improve the results of their day-to-day jobs.

Inference remains an area where things can get a bit complicated. NLP is good at interpreting language and spotting ambiguity in elements when there isn’t enough clarity in data sets.

A business user enters a search term in Ask Data and sees the answer being presented in the most insightful way. But pulling out the right elements from the right tables and variables—the actual SQL query under the hood—is hidden from the user’s view.

NLP is good at leaving no stone unturned when it comes to solving for problems. But alone, it’s not the best interface when the user doesn’t know enough about what they’re looking for, can’t articulate a question, or would rather choose from a list of options. For example, a user might not know what the name of a particular product is, but if they click to view a menu with a list of products to filter through, they’ll be able to make an easier choice. This is where mixed-modality systems like Ask Data shine. 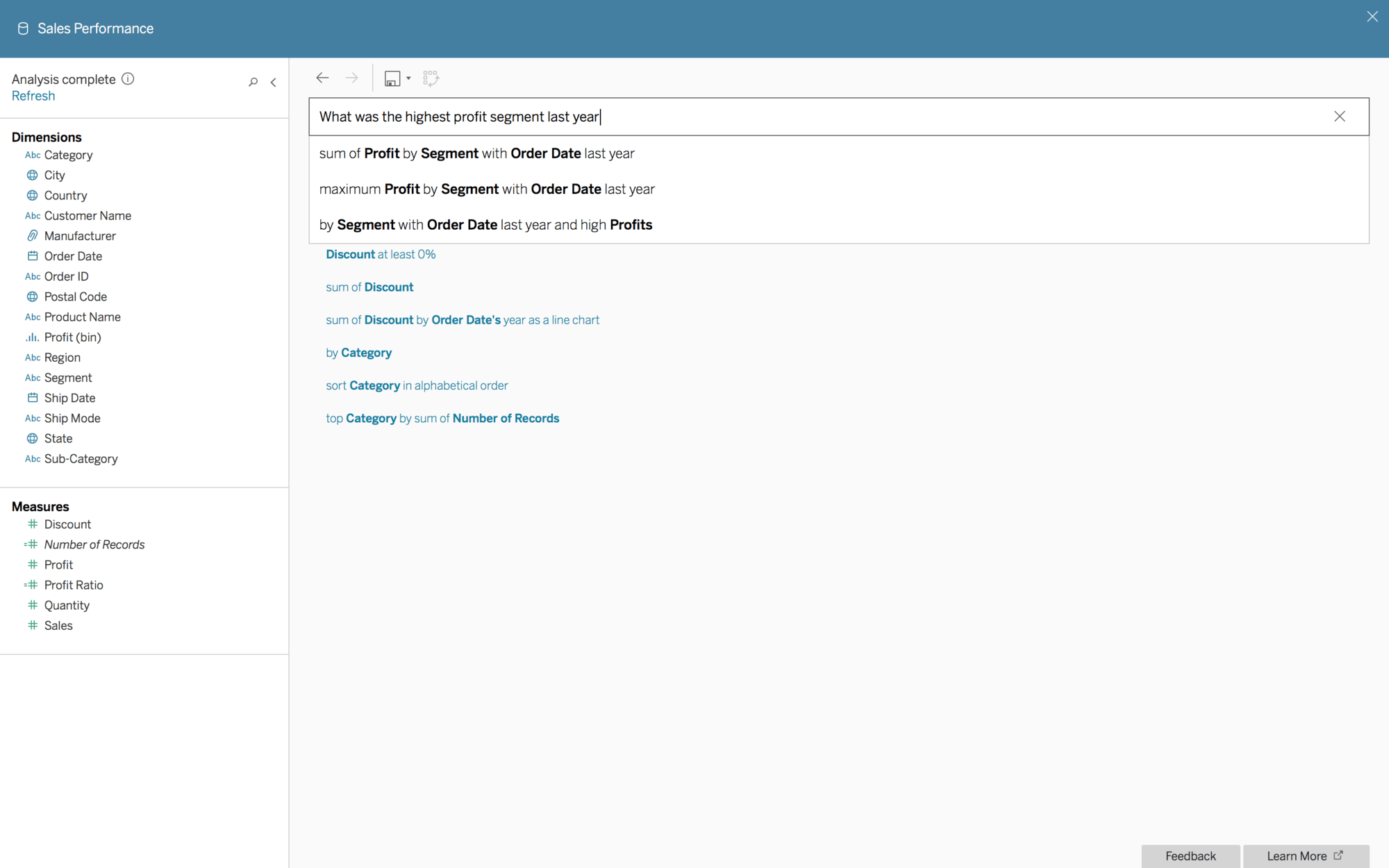 NLP is still not the most effective at resolving a query when there’s lots of room for interpretation—especially when it hasn’t seen the specific query before. For example, if a colleague were to ask to “email Frank,” then we as humans tend to know to look for the Franks we know professionally, not the Franks in our family or circle of friends. As humans, we have the advantage of tapping our memory to inform the context of a request based on who is making the request. NLP still has some catching up to do in this department.

Enabling a culture of data

For companies looking to start talking with their data, the most important first step is to enable a culture of data. It is also important to pay attention to the needs and wants of the people that are required to handle data.

As with a lot of other implementations, starting with a small team and then expanding tends to be a successful approach. By equipping your team with the tools needed to explore data and ask questions, the team will then get exposed to the new ways data can be accessed. It’s also vital to make them aware of the growing global community resource of data explorers, that function as a sharing economy of tips and tricks.

Lastly, as functionality is still very much in the developmental phase, providing insight to vendors to inform product updates and new capabilities is invaluable. Endless chatter will get you nowhere. Meaningful conversations—with data—are the ones that count.

Learn more about Ask Data as a part of the Tableau 2019.1 release.