The Ring of Fire and the Bottom of the Ocean: Visualizing Earthquakes 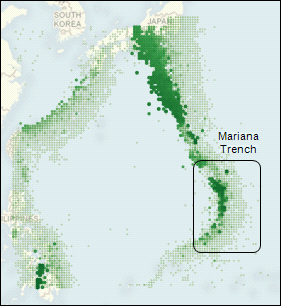 It’s interesting how a mapping of the earthquakes over the years evokes the shape of the Mariana trench: you could almost map it by its seismic activity. The trench is a subduction zone, which is the cause of its high earthquake activity and intensity. While the trench is an impressive 11 km deep, scientists have detected earthquakes at depths of more than 600 km. In contrast, divergent tectonic plate boundaries such as the mid-Atlantic ridge generate fewer, shallower and less violent earthquakes.

Finally, let’s take a look at all this activity in summary. Note that most earthquakes have a magnitude between 4 and 5 on the Richter scale:

Earthquakes near the surface are known as "shallow-focus", and are far more prevalent. The second spike at 33 km in the graph below is consistent with the depth of the upper mantle.

The frequency of "shallow-focus" earthquakes may reflect limitations of our detection technology, which has improved over time as demonstrated in the "Depth vs. Magnitude" view:

For an online, interactive view of this data since 2004, visit the Tableau Public page on earthquakes. Or, download this workbook and explore the data on your own (using the free Tableau Reader, or a free trial of Tableau Desktop). And if you see a big one coming, call us and let us know.