For people trying to understand their location data and to see spatial patterns, Tableau is adding two spatial functions that will make analyzing location data easier than ever.

Location data can come in many forms and formats, but one of the most common formats is in separate fields containing latitude and longitude values. This data might reside in an Excel file, CSV, or any other table of data. These values could represent anything—the position of a physical location, object, Wi-Fi hotspot, wildlife, or literally anything else on the planet. For people trying to understand their location data and to see spatial patterns, Tableau is adding two spatial functions that will make analyzing location data easier than ever. The spatial functions are called MakePoint and MakeLine. While their names are self-explanatory, permit me a few paragraphs to showcase what is now possible with maps in Tableau.

Let’s start with MakePoint, a function that will allow you to use latitude and longitude fields in a spatial join. Spatial joins allow you to use points and polygons to join datasets based on their spatial relationship and MakePoint is the function that can...make points! Another way to think about this function is that it turns non-spatial data sources like text files and Excel tables into spatial data sources that allow you to spatially aggregate spatial data. In this example, I am going to explore the city of San Francisco’s open data for crime incidents by neighborhood. To get started, I visited data.sfgov.org and downloaded a neighborhood shapefile and the latest incident report data as a CSV file. The incident dataset includes latitude and longitude fields and a number of other categories like Police District or Incident Type. My questions are which neighborhood has the most reported incidents and what neighborhoods have the highest risk of theft. Look at how easy it is to answer these questions now. After connecting to the shapefile, I can add a connect to the CSV and use MakePoint in a join calculation to allow me to use Intersects to complete the spatial join. 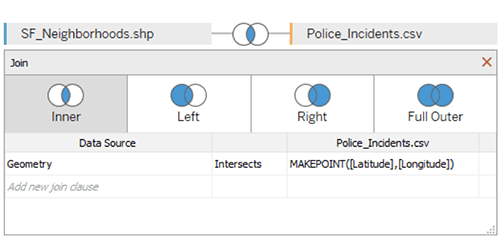 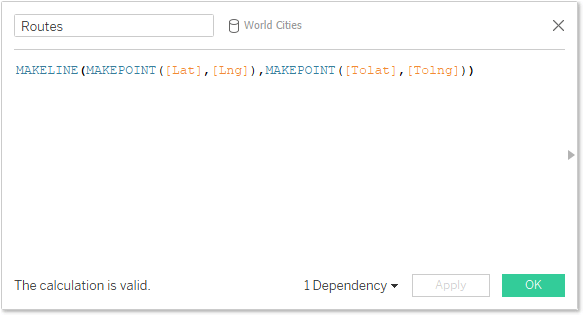