The decennial Census is the most widespread, critical, and influential government data the U.S. government collects. Population counts established by the Census determine how Congressional districts are drawn and how communities are represented politically. And they also determine how much federal funding flows into a community. Decisions about the need for schools and health clinics are influenced by the Census, as are transit projects, Medicaid funding, development efforts, funding for education programs like HeadStart, and so many more aspects that affect people’s quality of life. Both political representation and funding have significant equity implications—they are the two main levers for addressing disparities, and without an accurate count, their strength is diminished.

COVID-19 has shown how much investment in communities and health infrastructure matters, and how critical it is that people be represented accurately so their needs can be heard and met by the government. But the pandemic has also complicated the Census data collection effort. Response rates are lagging compared to previous years, in large part due to the fact that in-person outreach has had to be put on hold or limited to maintain social distancing. Increased dependency in online responses, too, threatens to leave out lower-income people who may lack access to the technology to fill out and submit the form.

The Census is just one lever to pull in the fight toward racial equity and justice in the U.S., but it’s an important one—and one we can take action on quickly. After the murders of George Floyd, Breonna Taylor, and too many other Black Americans this year—on top of the pandemic that’s disproportionately affecting Black people and people of color—I and the Tableau Foundation team dedicated ourselves to thinking about what more we can do to empower people at the community level to make change. Ensuring people were counted during the Census, and that communities of color are accurately represented and consequently resourced, felt especially urgent as the timeline for completing the Census count winds down.

We got in touch with our partners at Headwaters Economics, who are experts in analyzing data to foreground the needs of marginalized communities. They shared our concerns about the potential for communities of color to be undercounted. “We know that communities of color were underrepresented in the Census from previous years,” says Patty Hernandez Gude, associate director at Headwaters Economics. Historical miscounts in the Census have also engendered mistrust of the system among Black communities and communities of color. People—particularly immigrants and Black people—who have faced disproportionate profiling by law enforcement or government agencies are concerned that giving their information to the Census would make them more vulnerable to targeting without receiving any of the benefits of an accurate count, because they’ve been historically underrepresented. And COVID-19 has created even more barriers to participation. “It makes sense that in a year that people are struggling with health risks and unemployment, and door-to-door outreach is limited, that response rates would be low. All of this adds up to a situation where communities of color stand to be represented even less in the 2020 Census than they have been historically. This would be a monumental step backwards.” 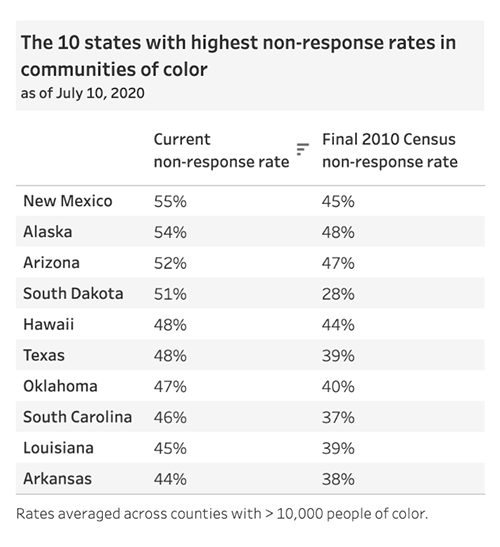 Both because of the virus itself and its disproportionate impact on people of color, and the horrific killings of Black people at the hands of police during the pandemic, issues of racial inequity and injustice have been at the forefront during the pandemic. While discussions at every level of government and in community-based organizations are focused on how to remedy these issues, Headwaters’ aim is to ensure that one of the foundational tools for representation and data in the U.S.—the Census—isn’t forgotten about.

To draw attention to the urgency of the Census and to show where communities of color are most at-risk of being undercounted, Headwaters created a series of maps in Tableau that show response rates for four minority groups: Black, Asian, Hispanic and Latino, and Native American. To create the maps, Headwaters pulled in data on Census self-reporting from the U.S. Census Bureau (which is updated daily), and overlaid it with demographic data on the racial and ethnic makeup of communities across the U.S.

You can see an overview of the project here: https://headwaterseconomics.org/equity/census-response/

And access all the maps for each group here:

The goal with compiling the response rate data into maps, Gude says, was to create strong visuals that clearly show where the risk for undercounting is highest. Looking at the maps, you can quickly see that Black people are at high risk for being undercounted in the deep South and parts of Southern California, while undercounting risks Hispanic and Latino people are highest in the Southwest, California, and parts of Florida and the Eastern Seaboard. Native Americans community response rates are low in parts of the Southwest and Plains states, and Asian communities are most undercounted in California.

Headwaters just published the visualizations, and is working to get them into the hands of advocates doing targeted Census outreach to improve response rates. “If groups are working with limited resources, the map format can help them quickly identify where their efforts can make the most impact, and for people looking to support, they can see where local nonprofits working with communities of color to increase the counts might need the most assistance,” Gude says.

With the October 31 hard deadline for Census responses quickly approaching, Gude and the Headwaters team are hopeful that making this data publicly accessible can spur action over the next few months. “There is momentum now around the need to make progress toward racial justice and issues that affect communities of color,” Gude says. “It’s unfortunate that a flashlight needs to be shined on this issue, but hopefully the data can serve a purpose and be used to more effectively direct energy and resources in this critical period of time when it can really make a difference.”

To learn more about Headwaters’ work and efforts to increase representation in the 2020 Census, visit their website.
Learn more about Tableau’s work to accelerate the use of data for racial justice here.