Digging into concert setlist data: Which artists play the same songs over and over?

This blog was originally published on the Data Beats Medium page. To explore more data behind the music we love, check out the Data + Music project.

Have you ever considered how much thought a band gives to the songs they play in their live sets? How much does their setlist vary for each venue they play on a tour? As their new material dries up and they rely on the old favourites, do they stick to the same old formula, or do they mix it up night after night to stop themselves getting in a rut? And what about those myths — have the Grateful Dead really never played the same set twice? Was Billy Joel right when he said he parted company with Elton John because “I got tired of doing the same show over and over again”? And do REM really never play “Shiny Happy People” live?

Thankfully setlist.fm has been crowd-sourcing setlists stretching back decades, so we have some data we can use to start answering these sorts of questions. We took a look at over 200 of the most popular artists on setlist.fm (~180,000 sets) and analysed how their sets have changed over time, mathematically comparing each set with the previous one to determine a “similarity” measure between consecutive gigs.

Measuring setlists by similarity: Which bands played the same list over and over?

Our Consecutive Set Similarity (CSS) measure scores sets as a 1 if they are identical to the previous set, and 0 if they are totally different. Gigs that reverse the setlist order of the previous gig would score -1.

[Incidentally it appears it’s very rare for bands to reverse their setlists — the only incident we could find was this anecdotal setlist from the Pixies which was apparently a reverse of the previous night's set, with the band walking off after the encore (the first song).]

Remember, as we discuss this CSS measure, if it averages close to 1 for an artist, it doesn’t necessarily mean that all of their setlists are similar, but rather that a lot of their setlists were similar to a setlist from a previous gig. 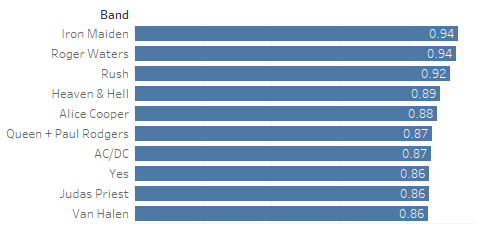 Bands with the highest CSS scores, meaning their sets typically stay consistent for each gig.

Highest CSS score (sticking to the same list): Let us look at the bands that score highly by their average CSS measure first. These are the bands that are consistently playing the same sets night after night. Iron Maiden scores the highest, having an average CSS measure of 0.94 — meaning about 80% of their 2,188 gigs recorded on setlist.fm were identical to their previous set. 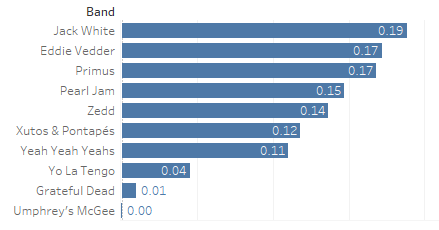 Bands with the lowest CSS scores, meaning they like to switch things up with their concert setlists.

Lowest CSS score (switching it up): The bottom of the list gives us the bands that are continually refreshing their setlist, adding new songs and refreshing the order. One American rock band, Umphrey’s McGee wasn’t familiar to us, but they certainly have the lowest CSS score, matching their Wikipedia description that says: "The band’s approach shares many elements with groups like Phish and the Grateful Dead such as varying setlists, improvisation, playing two sets per night.” We also see the Grateful Dead appearing second to bottom, perhaps as expected given the myth that they have never played the same set twice.

Let’s tackle that Grateful Dead myth first then. Using data pulled from setlist.fm, we’ve found no fewer than five instances where the band played the same setlist. While some of these might be due to data collection issues (some are on consecutive days in the same location), it seems likely we can count this myth BUSTED: the gig they played on 8th July 1970 at Mississippi River Festival 1970 matches the one played on 16th January 1970 at Springer’s Inn, Portland, OR, USA.

While we’re tackling myths, let’s look at that Billy Joel one. Was he right to say that he “got tired of doing the same show over and over again” with Elton John? If we compare the gigs the two played together (the blue highlight below) to two individuals (in orange) we can see Billy certainly had a point — the two score very highly on our set similarity measure (the vertical axis).

The plot below shows the average CSS measure over an artist’s lifetime by their total number of sets on setlist.fm. The size of their circle represents the length of the average set. 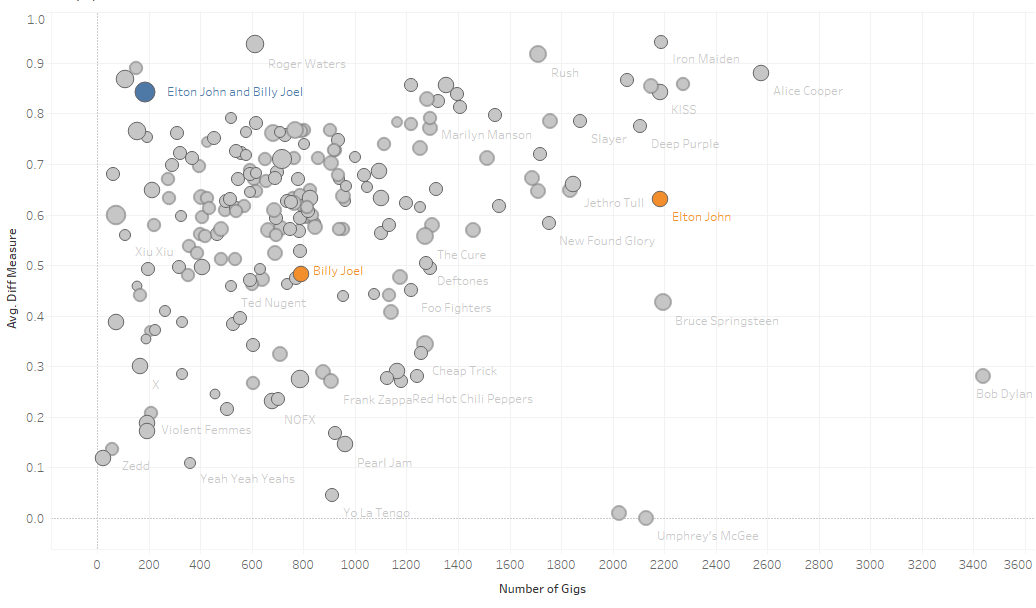 From the data, it’s fair to say that Billy Joel had a point — so perhaps the myth is PLAUSIBLE.

Finally, what about REM — do they really never play “Shiny, Happy, People” live? Well it turns out, at least according to setlist.fm, that the myth is VERIFIED. The only two gigs listed with that song were only two tracks long and for TV studios ,  so we excluded them from our analysis.

Exploring the setlists of Bob Dylan and The Rolling Stones

What have we learnt about individual artists from our analysis? Well let’s just pick out a couple… 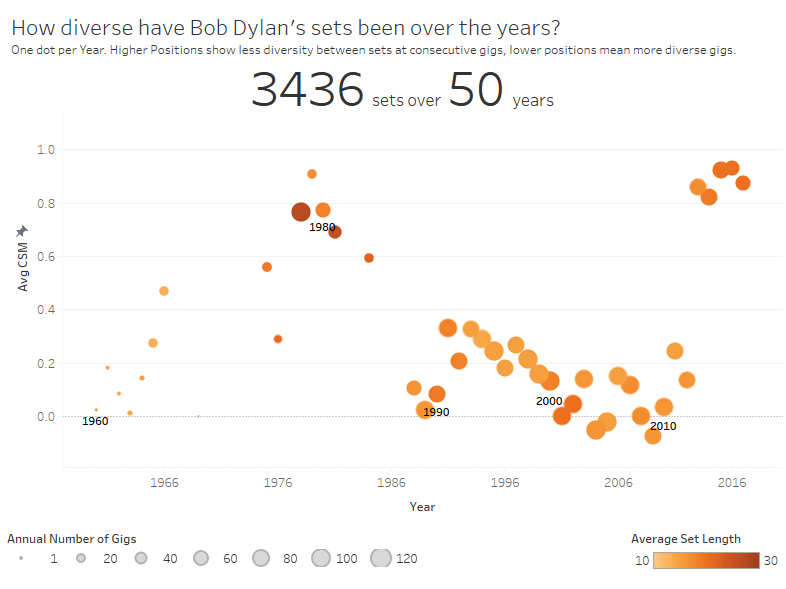 Bob Dylan is the most prolific artist in our analysis — and as you can see from the chart above, his gigs started to get a bit more repetitive between the 60's and 80’s. However, as he ramped up the number of live shows, he kept them interesting — maybe for himself as much as the punters. From 2013 onwards though, he’s more or less been playing the same gig.

Over the same period The Rolling Stones haven’t been nearly as prolific with less live performances (only around a third of Dylan’s live performance count). Their “Licks” World Tour in 2002 marked the zenith of their diversity on the road, a big departure from the uniformity of their setlist during the 1982 “Tattoo You” European Tour (they scored a massive 0.97 in that year).

We can visually compare the setlists on tours to see what this difference looks like. The “Tattoo You” tour had a very fixed setlist as the data indicates:

The difference to the Lick’s Tour being immediately obvious:

You can explore different artists in the interactive career tracker here.

Taking this comparison between artists further, we can group them based on the diversity of their gigs, the number of sets they’ve played, and the length of their average set. 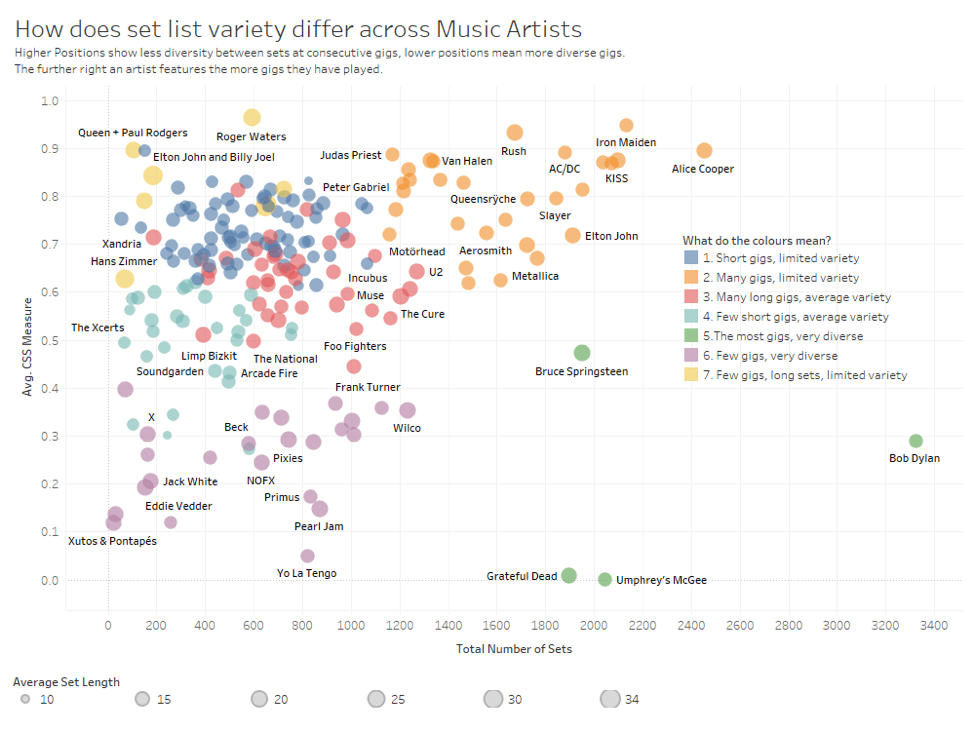 The bands from our analysis in each “cluster” are listed below. We’ve provided rough descriptions to aid understanding the differences between each one: 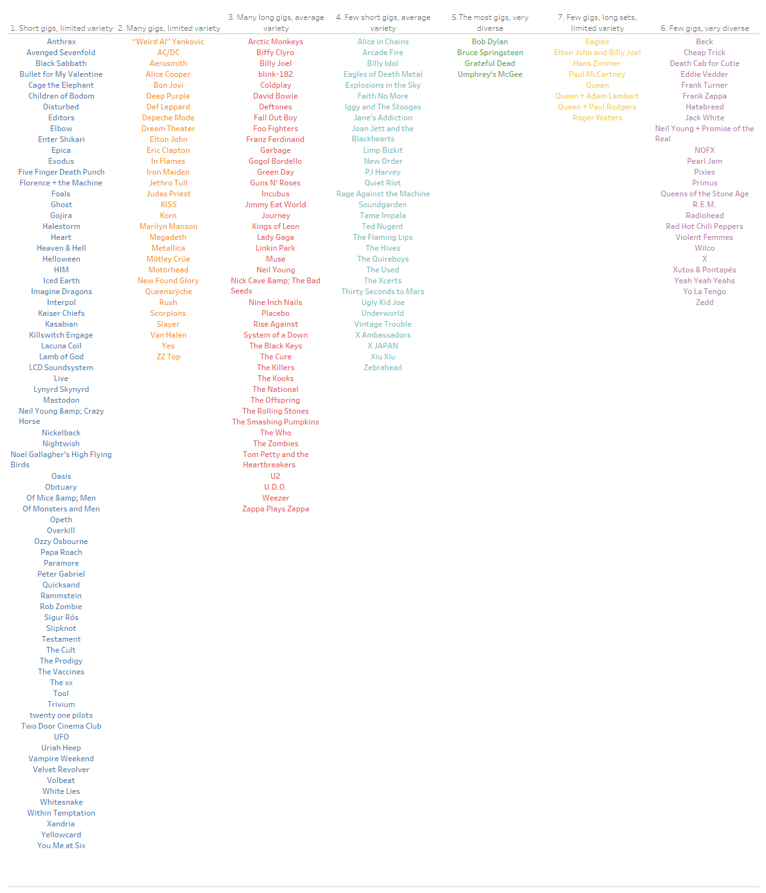 In conclusion, we can learn a lot about artists by their setlists and touring history. With a few exceptions, the bands that have been around the longest and played the most gigs typically churn out the same set time after time, perhaps because of the effort it requires to constantly mix up a set and keep the audience happy.

To learn more about our methodology, read the original posting here. Thanks to setlist.fm for the data, and also to Louis Archer for sub-editing.

Want to see more Data + Music stories? Explore the collection of visualizations from the Tableau community.