Creating, not designing: The four goals of every information experience

Editor’s note: This is the second post in a series about visual design with data. Read the first here, third here, fourth here, fifth here, and sixth here.

Last time, we talked about the information communication triangle that connects the creator, the audience, and the information product. We pointed out that the success or failure of our work as creators is truly dependent on what happens on the side of the triangle over which we have no direct control: the relationship between the information and the audience. 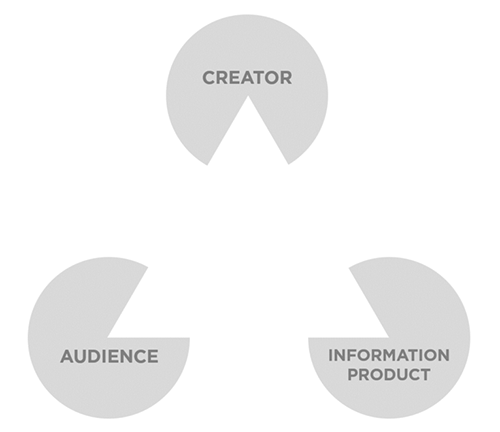 We do that by using our direct control over our information product—making it as appealing, accessible, interesting, and useful to the audience as possible.

And how do we do that? By using the things we know about the audience, based on our direct relationship with them. We consider their motivations, their prior knowledge, and their interests—as well as some basic human tendencies—to create something specifically built for them.

So when we create a product, it takes more than just following recipes, tutorials, or decision trees of chart choices. To create an effective information product, we cannot be merely technicians.

What we are not

We are not automatons, looking through Ye Olde Booke of Beste Practices to see what chart matches up with what data, and what color palette is the “right” color palette to use, based on the available criteria.

But neither are we merely artists (or, to use a modern recasting of the word, “creatives”), restlessly in pursuit of the magical aesthetic that will dazzle in a way no audience has ever been dazzled before.

We are not pure analysts either, assessing the data with an intense objectivity and providing findings with as little fanfare or editorial contextualizing as possible.

We are not creatives, but creators: builders of experiences specific to a time and place, to an audience, to a subject and context, to a scope, to a goal.

To be successful in doing this, we can’t position ourselves definitively above all else as aesthetes or analysts or technicians or psychologists or scientists or coders. Rather, we have to continually become more of all of these things, together and interwoven. This will give us the power to use all of the various skills, tactics, and techniques of these fields, in whatever proportions are appropriate for each individual information experience we create.

There are those who would dismiss such a statement out of hand, who would claim that we are making grandiose, self-important claims about data visualization; that we are elevating the humble task of making charts (”Excel does this automatically”) to a level of importance far beyond what it deserves.

That is why there is so much bad design in data visualization.

To think that “it’s just a chart” or “it’s just a dashboard” is to mistake the tool for the goal, the medium for the message. And the tool doesn’t make the product—you do.

For instance, I can buy a sewing machine, but that doesn’t mean I automagically know how to make a suit. I can buy a table saw but I can’t build a house. I can even watch videos online telling me how to do these things, but I won’t know what about a suit makes it appropriate for the wearer or the situation. And I won’t know all the things about home construction that make a house legal, safe to live in, durable, comfortable, and so on.

What do we mean when we say “design?”

Maybe most commonly in general usage, it’s a synonym for “aesthetics.” Maybe in some people’s definitions, design is a term solely reserved for how things look, which others might also include how things feel. Some might even go so far as to include look, feel, and “how this makes me feel.”

For an architect, it’s precision and science as well as aesthetics—a building’s design must include the engineering parameters that make that look and feel possible.

For an app developer, design includes the functionality of the product, the interactions and feedback that make the product usable, and even the motivations behind the way the product is used (e.g., “it’s designed to make you want to stay and play one more game”).

All of these job titles exist, and yet they have wildly different responsibilities, concerns, and mandates. How can we realistically use one word, “design,” to cover all of these things?

A specific phrase for a specific idea

If we’re going to talk about what “design” means in the world of data visualization, we should find a way to be more specific in our language—to find a term that is harder to misconstrue and can be universally understood.

Our general definition of success in delta design is to provide an information experience to an audience that materially benefits them.

(In truth, there is a fifth, unstated goal, which is “actionable change,” but rather than a goal that we as creators can set out to achieve on its own, it will follow from the successful achievement of the four main delta design goals.)

More simply, delta design is about presenting your product to an audience in such a way that they can answer “yes” to all four of these questions:

What am I supposed to do with this?

Here’s the important part about delta design: anybody can do it. It is the truest answer to the question so many dataviz creators ask: “How can I become a better designer?” We hope these posts will help to get you there.

Because delta design isn’t a magic trick or a fad diet. It’s a different philosophy of how to approach our dataviz work. It takes practice and focused effort and a new way of thinking about creating data visualizations.

There is no prerequisite, no bright-line test, no minimum level of aptitude in one specific skill area. Remember the various roles we mentioned earlier? Aesthetes, analysts, technicians, psychologists, scientists, and coders? All of us—those of us writing these words and those of us reading these words—are all of those roles, in different measures.

We will all solve the challenges in front of us using the skills we have, and the skills we eventually develop. Delta design is about reframing the challenge so that a successful solution leads to the best outcome for the audience. If we lean on aesthetics, and our colleague leans on psychology, but we get to comparable solutions, that’s perfectly fine.

In our next few articles, we will be talking about these four goals in more detail, including how you, as the creator, can reset your perspective and learn specific tactics to achieve these goals more easily and more frequently.

This is the second post in a series! Read the first post and stay tuned for the next!