In a city where deep dish pizza and hot dogs reign supreme, Chicago also serves up generous servings of innovation. And innovation is exactly what the Tableau Developer Platform team found during the second stop of the 2019 #DataDev Hackathon series.

The hackathon series has a deceptively simple goal: in 24 hours, hack Tableau and bring an innovative idea to life. In Chicago, teams created hacks that were anything but simple, ranging from an extension to enable users to set personalized alerts on their dashboards from a pop-up, to a solution that assists marketing teams with their Twitter strategy. All the hacks were next-level stuff, but in the end, the winning hack was built by Motorola Solutions.

The hack has a maximum team size of four, so the Motorola group was able to field two teams.

According to Benjamin, “We whiteboarded a lot of ideas. We wanted to see what we could accomplish and bring back to Motorola. It was built on top of a reoccurring theme. Over the past six years, demanding customers (sales and execs who want to be informed but don’t necessarily understand the BI tools) and the increasing number of IOT uses. So, we thought why not use that to build something that could potentially be a cool solution for us. Then, the week before the hack, an article came out on a google assist for your car so wanted to bring that type of functionality (AI and voice-command) to our hack. Some of our chatbot efforts also fed into this. Asking info from chatbot comes back in a text format so we wanted to bring something more informative and analytical.”

Erica comments, “Yeah, we wanted to encourage users to go beyond the traditional BI reporting, something more interactive.” But it wasn’t all work and no play for the Motorola team, their Business Data Engineer Erica Li saw Flex, the Tableau Developer Program mascot and found a kindred spirit. “I saw and loved the T-Rex and knew it was going to be a good event!” she said. The team used the event and T-Rex props to take some great team photos.

The hack was held at Tableau partner Narrative Science’s offices and started off with a networking Happy Hour where Tableau Developer Evangelist Keshia Rose provided an API walk through and discussed examples of hacks attendees could build during the event. Hack teams were not only competing for a trophy and bragging rights, but also free passes to this year’s Tableau Conference in Las Vegas. 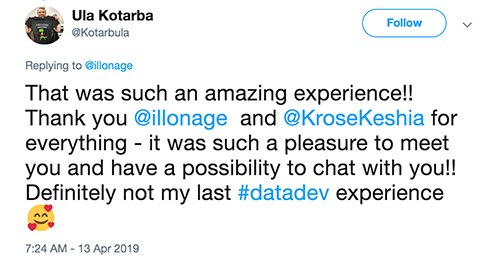 Ula Kotarba travelled from Poland to learn, hack and innovate

The hack now heads to Austin, Texas on May 2-3. Is your organization ready to get hacking? Register here for a chance to hack and win tickets to TC19.

Explore our series page to find more places to hack your heart out: