Visualizing the impact of $14 billion

Katie Ryan
Policy Officer, Health at The ONE Campaign
October 14, 2019

Update: In January 2020, Tableau Foundation renewed its support of the ONE Campaign’s advocacy efforts for transformative global progress against poverty, disease, and inequity.

This three-year, $500,100 commitment will build off the success of ONE’s use of Tableau in mobilizing elected officials across the globe to commit $14 billion to the Global Fund to End Aids, Tuberculosis, and Malaria. Using Tableau, ONE visualized the live-saving impact of each contribution to the fund to encourage leaders to recommit, while also tracking overall progress to the goal of $14 billion in real time.

With the renewed support of Tableau Foundation, ONE will be able to build this kind of targeted, data-driven advocacy into every one of its campaigns. ONE’s team of advocates will be able to show elected officials everywhere how their personal decision to contribute support to global campaigns brings solutions closer within reach. And with real time data analytics and forecasting, ONE will be able to track progress toward every campaign goal, proactively plot out different scenarios and contingencies, and understand where they need to double down on their efforts. Operationalizing this use of data and analytics across their operations will enable ONE to accelerate its advocacy efforts to solve some of the world’s most pressing challenges.

While the world has made tremendous progress against AIDS, tuberculosis (TB), and malaria, almost 7,000 people still die from these deadly diseases each day. And women and girls are often the hardest hit.

Enter the Global Fund to Fight AIDS, TB and Malaria. The Global Fund is an innovative partnership—between governments, civil society, the private sector, and people affected by the diseases—to accelerate the end of these epidemics. The partnership has helped save 32 million lives since it was formed 16 years ago, making it one of the most effective health partnerships. The Fund held its Sixth Replenishment Conference in Lyon, France, earlier this month to raise at least $14 billion to continue its life-saving work for the next three years. To help the Global Fund meet its critical goal, ONE launched a campaign calling on governments around the world to commit funding and help save an additional 16 million lives.

Visualizing the impact of funding

ONE is a global movement campaigning to end extreme poverty and preventable disease by 2030, so that everyone, everywhere can lead a life of dignity and opportunity. We believe the fight against poverty isn’t about charity, but about justice and equality. ONE supports grassroots campaigns and pressures governments to do more to fight extreme poverty and preventable disease, particularly in Africa. And ONE empowers citizens to hold their governments to account.

If we want to see the end of AIDS, TB, and malaria by 2030, we need to step up the fight and act now, with powerful advocacy and measured progress.

To end these epidemics by 2030, we need countries to intensify the fight and commit to increasing their pledges. However, given currency shifts, sluggish economies, and stressed global cooperation, it can be an uphill battle. How do we ensure decision-makers understand the impact of the Global Fund's work? How do we demonstrate to them that their country’s contribution matters?

We needed a way to make global news local. Here at ONE, our advocacy and campaigning depend on our ability to convert complex issues into digestible, actionable information. How do we break down those topline statistics into something of which a representative can take ownership?

Our partners at STOPAIDS developed a tool that laid out the impact of each British constituency’s contribution to the Global Fund in a simple, interactive tool. It proved to be incredibly powerful: politicians were proud of the impact of their constituencies and excited to share these results with them.

Utilizing Tableau, we created a similar tool to ramp up our advocacy efforts in six other countries. By including an interactive map, we hoped representatives could better understand the crucial part their constituency plays in saving lives around the world through its contribution to the Global Fund.

In the US, this meant working with representatives and senators to secure their support for the Global Fund. Let’s take Delaware, for example. The second smallest state in the country had a significant impact on the global stage: through its contribution to the Global Fund, Delaware helped save 47,448 lives since 2002. 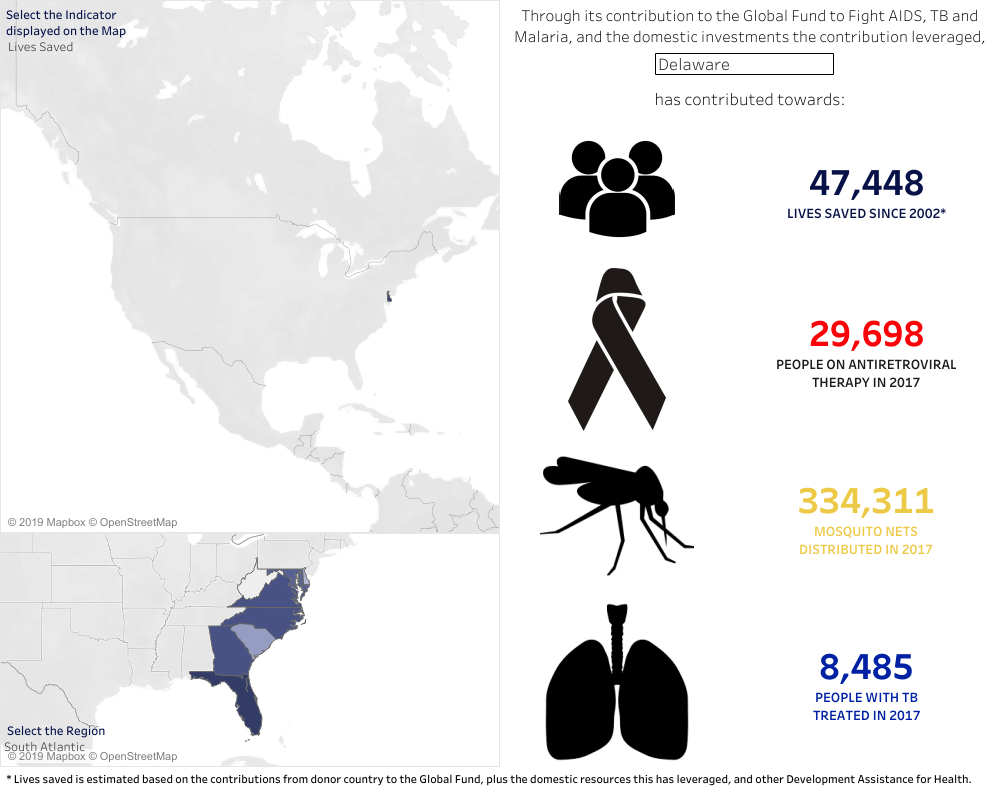 Our ONE members took our visualization to Senator Chris Coon’s office in February during our annual Power Summit. They asked for his support of the Global Fund. His response? 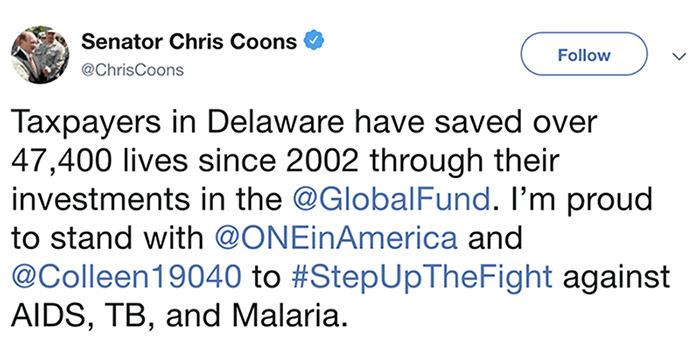 Now, that is a powerful visualization, and that is powerful advocacy.

Tracking the path to $14 billion

We had a spreadsheet to document pledges to the Fund as well as our most conservative and optimistic scenarios. But we also wanted to share the paths to $14 billion at our board meeting in June. With limited time and capacity, we reached out to Ken Flerlage, a Tableau Zen Master. We asked him to help us build a tool that would track progress and show the gap to the $14 billion goal. Within days, we had a working version that we could manipulate to demonstrate the current situation, the difference that an exchange rate could make, and our progress. 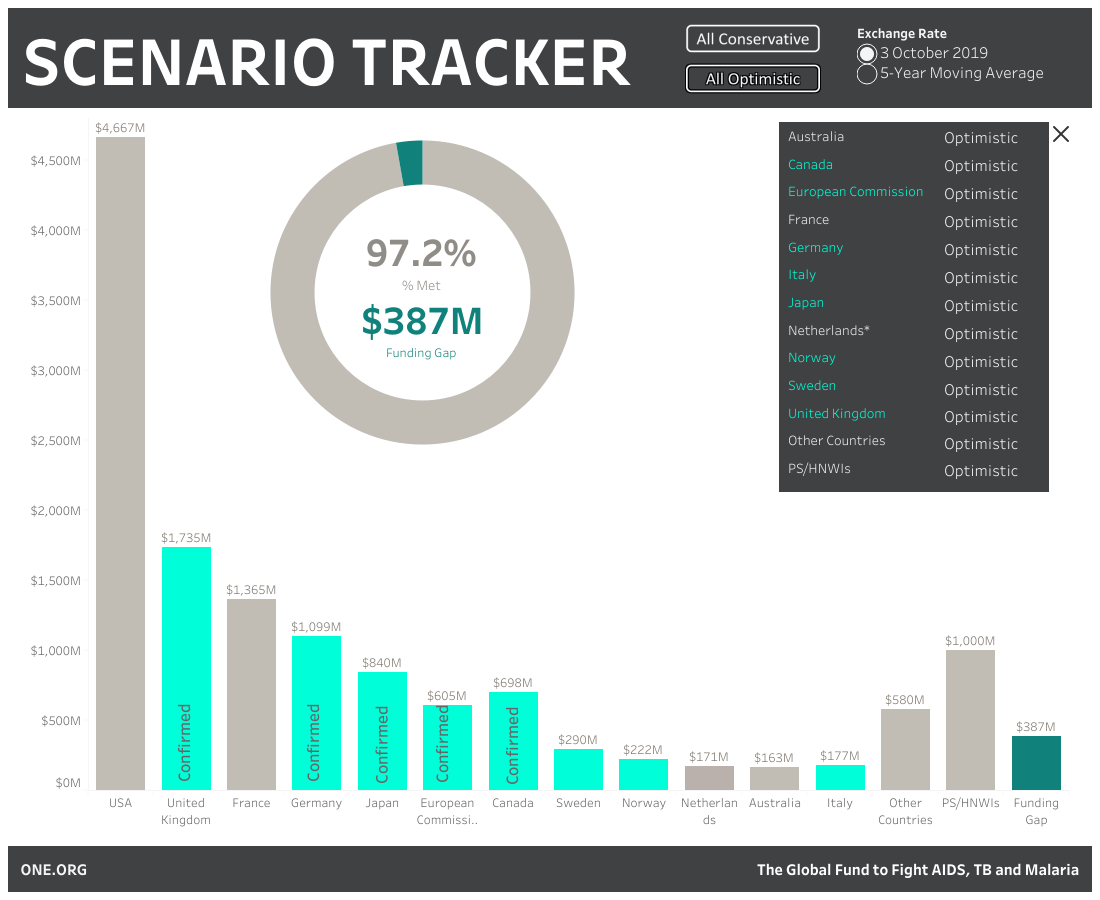 Each time a pledge was made, or we received updated intel, we could quickly update the visualization to demonstrate the new path forward. We utilized the visualization almost daily up to the Replenishment to track progress. With a tooltip that provided more in-depth information, we were able to answer any question thrown at us.

Our world has become crowded with competing issues, ideas, and requests to decision-makers. To cut through the noise, we needed to find a way to guarantee that our appeal to support the Global Fund would stick. Decision-makers get bombarded with numbers, and a compelling statistic is only powerful if it affects change.

Instead of relying on a few topline statistics, we wanted to leave an impression on decision-makers by providing something interactive. Something that made big data relatable and concrete. We needed to visualize this data.

Tableau helped us to equip our members with actionable data that change the minds of decision-makers. Thanks to the work of ONE and critical partners, we are celebrating a key victory in the battle to eradicate three of the world’s most deadly diseases. As a result, 16 million lives will be saved. Now that is a compelling statistic.