Each year at Tableau Conference, we host hundreds of developers at our annual hackathon. Developers form teams and compete—not only for prizes and bragging rights—but also to spend time with our Developer Platform team to sharpen their skills and learn from our experts.

This year marked the fifth year of the #DataDev hackathon, and participants brought their A-game. From creative extensions, to using the Hyper API, to bringing CSVS into Tableau, to dynamic filters, our DataDevs used their coding skills and creativity to battle it out for our annual code championship.

Over 20 teams demoed to over 500 spectators, but in the end, team EasyHooks, composed of Merlijn Buit and Tristan Guillevin, came away with the $1000 Grand Prize and custom #DataDev Rockstar trophies. More importantly, they also earned the title of #DataDev Hackathon Champions until next year’s Tableau Conference. Team Easyhooks’ winning hack was building a UI interface for our newest API, Webhooks. According to the team, EasyHooks is a web app that allow any Tableau Server admin to easily enable the recently introduced webhooks in Tableau. By simply entering your Tableau Server login and password, you have access to a user interface to select to webhooks to activate, and the destination URL. You'll also see the list of the existing hooks with the ability to remove them. For their demo, they also developed a Zapier service that automatically send Slack, Teams, and Email notifications when something happens on the server. 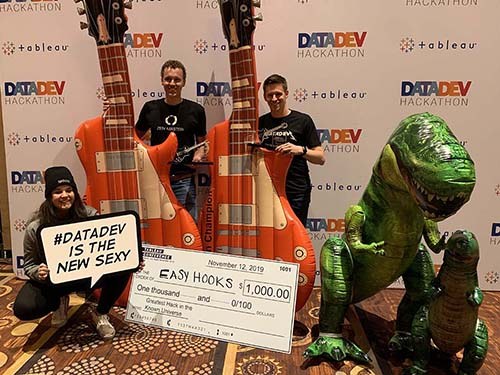 Team Dynamic Extract Refresh Prioritization with Anika Martynowych and Tim Hughes took not one, but two awards at this year’s hack. During their first-ever hackathon at TC, they won the Newbie award and the audience voted them in for the People’s Choice Award. Their hack aimed to fix a common problem for server admins when the backlog of extract refresh tasks accumulates while all refreshes attached to a schedule are queued at that schedule's run time.

During the demo, the team presented two separate servers with extracts that would wait over 90 minutes before they started refreshing. The main problem was that these refreshes were not smartly prioritized: they used either the schedule's default priority or a manual override that was set one-by-one. The team’s hack is to prioritize extract refreshes based on their usage—specifically, the number of associated views in the last 30 days—so that the most used extracts are refreshed first. The team used the PostgreSQL repository superuser account to query for usage stats and rank extracts, and then overwrote the priority values in the tasks table. 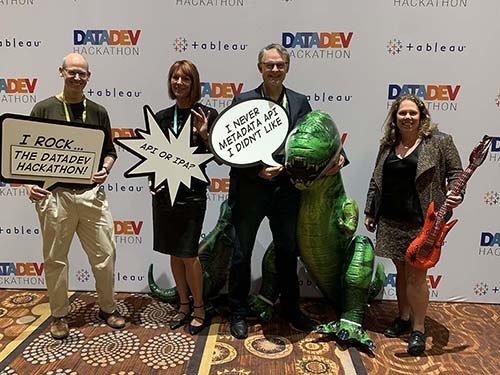 Join the Tableau Developer Program to be kept abreast of hackathons, trainings, and developer-focused updates.