When Oldcastle was looking to hire an analyst, Ian Crabtree, who was CFO at the time, met a curious candidate named Paul.

“He came in for an interview, and he asked me a question: He said, ‘How many pavers do you sell across the nation?’ So I went to my big book of data and told him the answer.

“And then he had more questions: ‘Was that price-driven? Was it a geographic bias? Which customers are growing and shrinking? Is there a product mix in sight?’” says Ian.

Ian told Paul to stop. He wanted too much information too fast. He’d get him those answers, maybe next week.

But the exchange made Ian realize something wasn’t right. Oldcastle wasn’t consuming its data in the most efficient way. And as North America’s leading manufacturer of building products and materials (“masonry and hardscapes, otherwise known as sexy concrete,” says Ian), the company had a lot of data.

To help keep track of all that sexy concrete across its 11 divisions and 170 facilities across the US and Canada, the company used to rely on its big book of data. The monthly report is “the size of a paver you’d put in your backyard,” according to Ian.

But the 500-page report did little to help drive decisions at the speed of business. It didn’t allow people to explore the why or ask their own questions of the data.

‘I want to see the data in this fashion’

Paul’s first task was to replace the 45-page PDF that arrived in people’s inboxes every morning. It showed the most recent sales numbers by divisions, by business line, and by facility.

Paul created a viz that not only contained the answers in the spreadsheet but also enabled people to ask follow-up questions. The viz also had row-level security, meaning teams would only see data they had permission to view. 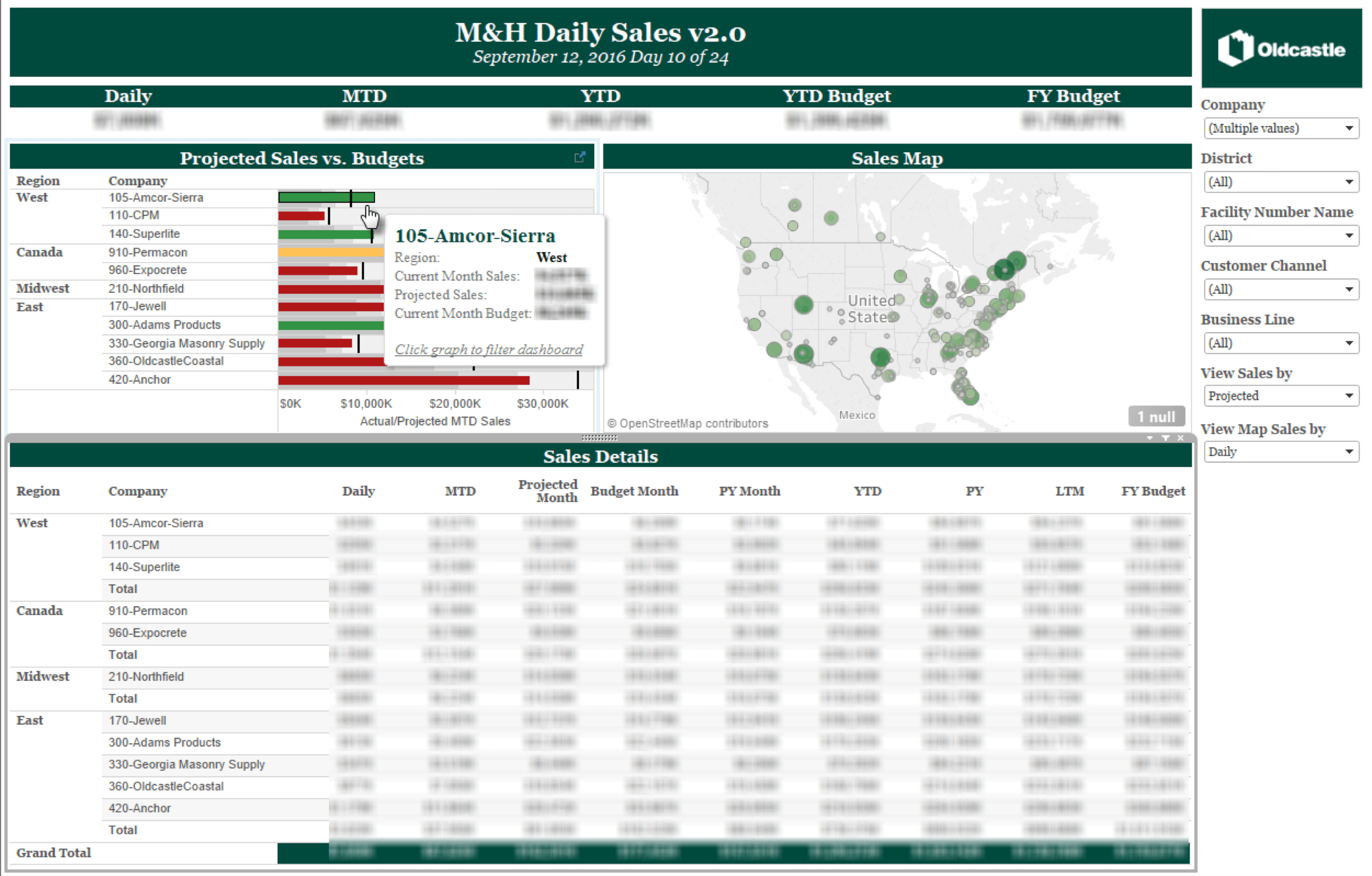 Once people realized they could ask their own questions of the data, the response was almost immediate, says Paul.

“We started getting phone calls: ‘Can you add this filter?’ ‘I want to see the data in this fashion,” says Paul.

With different requests pouring in, Paul tried to create a visualization that would serve all of their needs. And here’s what he came up with:

Click through the sequence in the upper-right corner to see the viz come alive.

In short, Paul realized there is no perfect visualization. It’s a myth, a unicorn.

“What we've found is that no matter what visualization you put out to 170 distinct manufacturing facilities, someone's always going to want to see the data in their own way.”

It was clear people wanted to see the data in their own ways. So Paul, with the help of several analysts, created a library of viz templates containing vetted data. Using web authoring, people can use these vizzes as a starting point for their own analysis and share their findings.

“We can give them a data set with predefined measures and dimensions, and they can build their own intelligence through the web-authoring tool. And it’s one single source of truth,” says Paul.

‘A true culture of self-service analytics’

Paul collaborates with IT, the “gatekeepers of the data,” to ensure data integrity.

“We have both SQL Servers and a Netezza data warehouse. They maintain the infrastructure, the security. And we work with them to produce the data models and dashboards,” says Paul.

Oldcastle pulls ERP data from its Netezza warehouse and creates a daily extract on Tableau Server. The company also pulls SQL tables from Salesforce and creates extracts to get quick insights into customer leads and opportunities.

With IT providing proper governance, everyone, from division presidents to manufacturing workers, is empowered to uncover insights and make an impact. Across the enterprise, Oldcastle has more than 300 dashboard authors and some 1,000 dashboard subscribers—and growing.

“This is a true culture of self-service analytics,” says Ian.

Helping the sales team spot the drivers, trends, and outliers

This culture is delivering huge wins across the enterprise, especially the sales team.

With some 78,000 SKUs, it used to be impossible for the sales team to spot losses, track margins, and seize opportunities. Now, interrogating ERP and Salesforce data, the sales team always has access to the full picture.

“Now a sales rep can come into a dashboard, look to what he sold yesterday, look to how he's doing this month, look how he's doing year to date. And then he's able to drill down into: What customers are doing well? What are those customers buying? What are my margins on those items?” says Paul.

A sales rep doesn’t want to worry about where to get the data or how, says Paul; the rep just wants to know where to go to get these insights on a regular basis.

Connecting resources across the enterprise

Dashboards are helping empower people on the manufacturing floor as well. The company has some 3,000 cement molds and stamps that total $45 million in value. With 11 divisions and hundreds of facilities sharing molds, people didn’t always know where these molds were.

So the company catalogued the mold and created a mold-tracking viz. Now, all facilities have a real-time view of all the molds—whether a certain mold exists, where it was last used, and whether it’s currently available.

“It went from zero to 60 overnight because we have about 200 production crews who are now looking at that visualization all the time,” says Paul. “We get people calling all the time about how this has changed their workflow.”

Empowering teams and rising with the enterprise

Paul is working to uncover pain points in people’s workflows and help find solutions. And as he does so, more people across the enterprise are turning to the data. People are authoring dashboards and sharing them. And data is helping drive conversations during meetings and presentations as well.

“It really has caught fire with senior management. And of course once people in the field see the dashboards, they say, ‘How can I get my hands on that?’” says Paul.

“Not only are we making better decisions, but we’re also getting to those decisions far quicker,” says Ian.

“They call me Mr. Tableau at Oldcastle. It has really propelled me within the organization,” says Paul. “When you wake up in the morning knowing you build dashboards for a living—that’s a great job.”