And the Winner of the War of TUGs Is...

Sixteen Tableau User Groups around the world spent the month of July fiercely competing in the War of TUGs. From Colorado to Atlanta, to Paris, our user groups tackled school performance data from the Ohio Department of Education, and created vizzes to benefit StriveTogether, an education-focused non-profit. We received 28 submissions from 16 TUGs who participated in the competition organized by Shawn Wallwork of our Albuquerque group.

And the winner of the War of TUGs is...

Cincinnati! Here’s the winning viz, which looks at the state of Ohio’s enrollment rate, graduation rate, and performance index by school and by district.

What the Data Showed

The user groups’ submissions helped contextualize the education data, which is both rich and complex. These vizzes showed a key insight, namely the impact of poverty on school performance. This relationship has been researched in the past, but visualizing the data highlights the connection. With the TUG-created vizzes, StriveTogether can look for the “bright spot” schools—those performing above expectations based on this connection.

How We Chose the Winner

We asked a group of Zen Masters, Tableau team members, and other Tableau users to serve as judges. Each of the eight judges ranked the top five submissions based on features and analysis they themselves found most useful. A tally of the votes placed Cincinnati at the top with lowest score of 23 (lower is better, like in golf), beating Kansas City by six strokes. 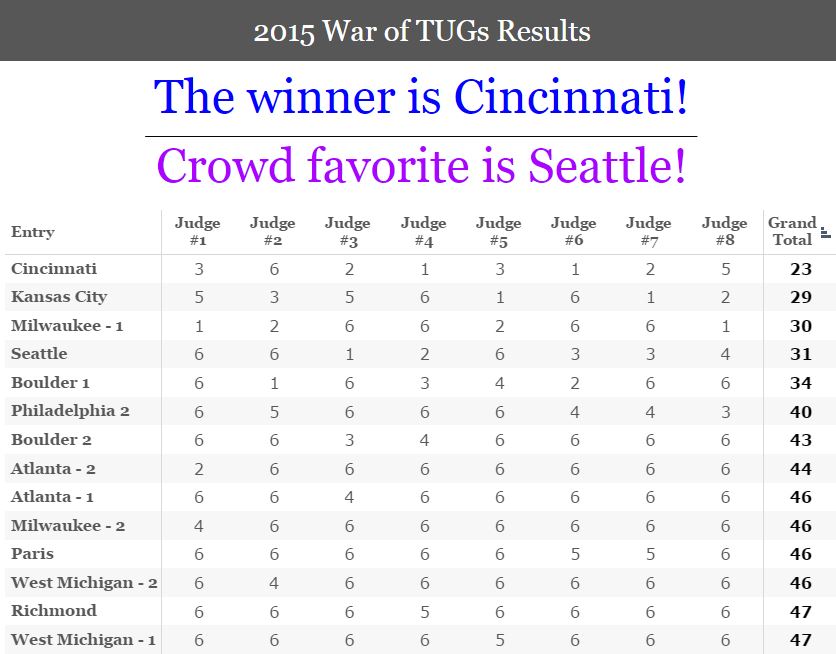 But the judges weren't the only ones to have their say. Each TUG submission had its own hashtag that fans used to tweet their support. And based on those tweets, the Seattle TUG took home the Popular Choice Award! Check out this video the Seattle TUG made about the competition:

Our user groups are the best way to learn how people in your community are using Tableau. If you haven't already, join a TUG near you!