Dash's Play-by-Play: How the Super Bowl QBs Stack Up 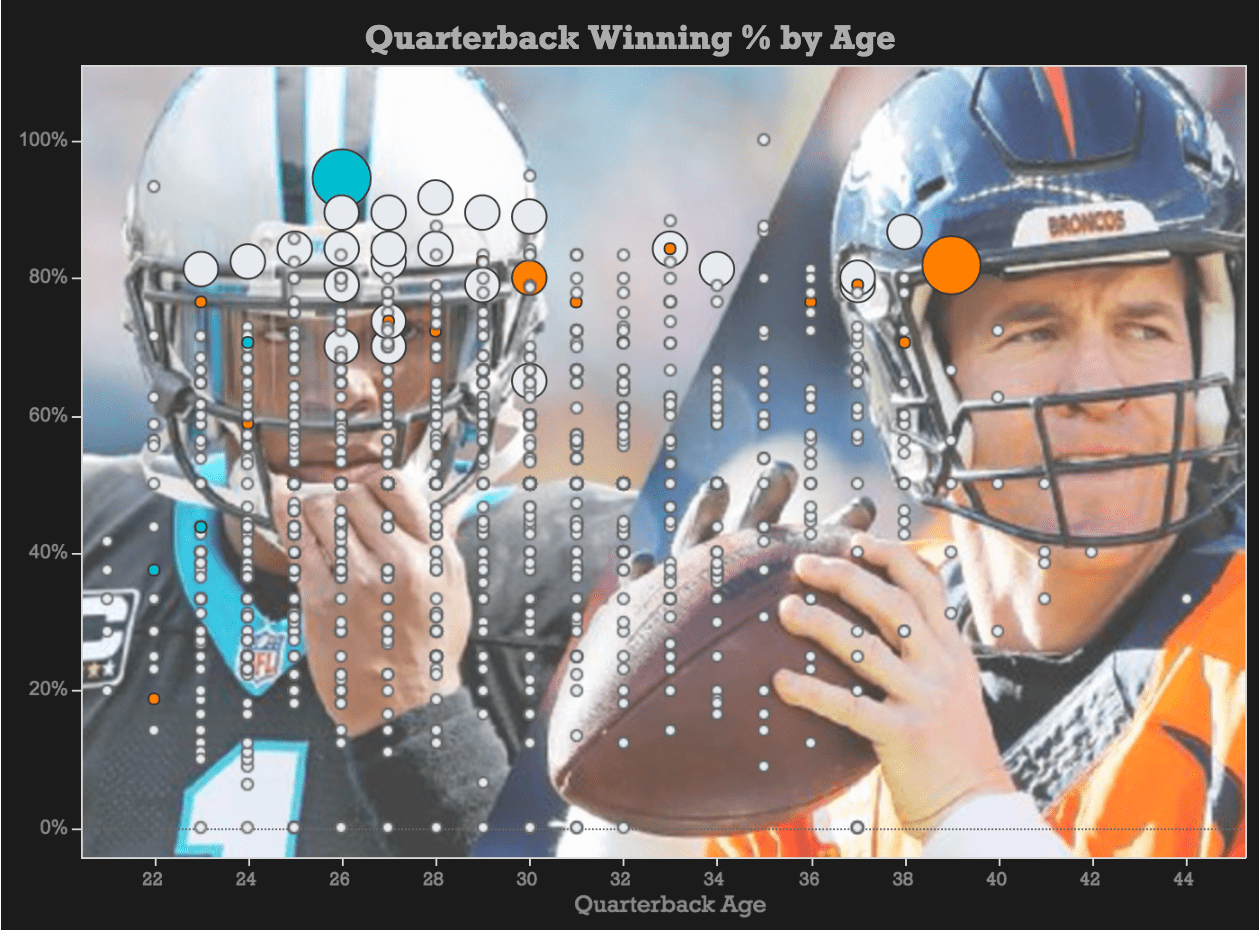 Scroll down to explore the full interactive visualization.

As Tableau’s sports data analyst, I feel it is my duty to get you all prepared for the Super Bowl. So I’ve analyzed the most compelling matchup of the game: Panthers quarterback Cam Newton versus Broncos quarterback Peyton Manning.

The paths that these two superstars have taken to the Super Bowl have been very different. On the one hand, we have Cam Newton, the 26-year-old phenom who has dominated the game at every level he has played. In college at Auburn, Newton won the National Championship and the Heisman Trophy. In the 2011 NFL draft, he was selected #1 overall. This season, he has led his Panthers to a 17-1 record, a performance that all experts predict will earn him the league MVP award when it's announced later this month.

Facing off against Newton will be one of the greatest quarterbacks the game has ever seen, Peyton Manning. Like Newton, Manning was the #1 overall pick coming out of college. But unlike Newton, it was way back in 1998. Manning has won a Super Bowl and multiple MVP awards, but this season he has limped his way into the biggest—and potentially last—game of his storied career.

If Manning’s Broncos win the Super Bowl, he will be the Super Bowl’s oldest winning quarterback. The age gap of 13 years between Manning and Newton is the largest amongst starting quarterbacks in Super Bowl history. A win on Sunday would be validation for the years of trauma that followed Manning's 2011 neck surgery. With the injury, Manning missed the entire season, got cut by the Colts, and signed with the Broncos.

This season, Manning has battled through a foot injury that contributed to him losing his starting-quarterback job. This will be Manning’s fourth Super Bowl appearance, and he is desperate to win his second ring.

How the Two MVP Quarterbacks Stack Up

The below data visualization shows the age gap between these two MVP quarterbacks. Each dot on the scatter plot representing a different quarterback season, separated by quarterback age and ranked by winning percentage. The large dots are Super Bowl winners. The two largest dots represent Newton and Manning this season.

The visualization also shows a statistical comparison of the two quarterbacks through their first six seasons—personally, I was surprised at how close all of the statistics were.

Although nothing can predict what will happen on the field in San Francisco on Sunday, my hope is that this edition of Dash’s Play-by-Play will help you be a more-informed viewer of America’s greatest spectacle.