Do You Say Coke, Soda or Pop? A Map Visualization Shows Your Likely Answer

A good Tableau customer, Michael Cristiani of Market Intelligence Group, recently sent us a challenge. He had discovered a dataset for which people were surveyed about their choice of words for their preferred icy, carbonated beverage. Specifically, did they use the word “coke”, “soda”, “pop” or some other word? There were nice maps on the site but with Tableau 4.0’s new mapping capabilities, he wanted to know what we could do with the data. Given that I was in a hotel room when I read about this, I decided to give it a go with Tableau 4.0 (beats renting a bad movie) and came up with some interesting results.

I got the state-level data – ZIP code and County data as shown in the maps don't seem to be available on the site – and created two data visualizations.

My favorite is the one below. It uses custom shapes of soda bottles (I’m from California so I say soda) I created (really just simple PNG or JPG files). The bottles are sized by the number of people who use each of the specific words. Different colored soda bottles represent coke (red), soda (blue) and pop (green). 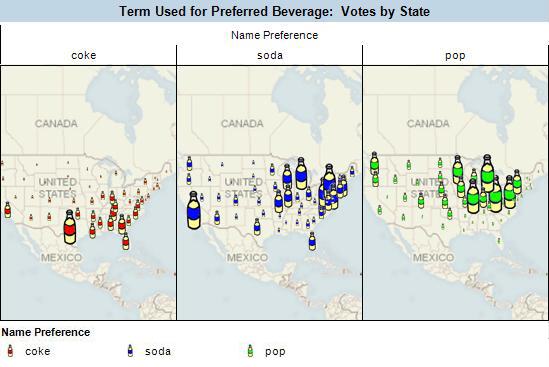 No surprise that Southeasterners (or what you could now call the “Coca® Cola belt”) have more people saying “Coke”. And Californians and Northeasterners say “Soda”. Midwesterners and Pacific Northwesterners say “Pop”. I was a little surprised by that last one – I moved to Seattle, WA about a year ago and hadn’t noticed people say “Pop” but a little testing with colleagues did show the truth of that.

I decide to look at the data another way: by pie charts on maps. That way in one map (rather than a small multiple containing three like above), I could see what proportion of the survey respondents said each of the three words. 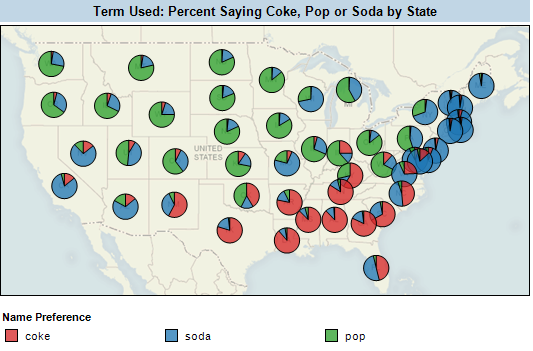 Of course, you can plainly see the pattern described earlier. But this time you can easily see that places like Florida are a little torn between “Coke” and “Soda” (probably the influence of 2 distinct populations in Florida – true Southerners vs. relocated northeasterners and “snowbirds”). Virginia, Oklahoma and Kentucky which all border the traditional Southeast in some way are also somewhat divided.

If you want to give it a try yourself, here’s my packaged workbook. You could also get the source data at http://popvssoda.com:2998/stats/ALL.html.