In 2018, the teaching team from LSE’s flagship interdisciplinary course LSE100 and staff from the Digital Skills Lab worked together on a module to develop students’ critical thinking and digital skills, addressing the question “Is there a path to global food security?”

Join us to learn about: 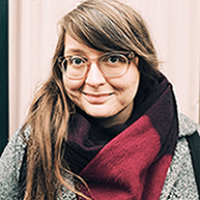 Jillian Terry is Assistant Professorial Lecturer and Deputy Director of LSE100: The LSE Course, the flagship interdisciplinary course for undergraduates at the London School of Economics. She is an award-winning teacher and feminist scholar of International Relations working on questions relating to the ethics of war and moral justifications of contemporary warfare practices. Currently, Jillian’s research includes projects on ethics in feminist security studies; the relationship between art, experience, and war; and co-teaching in interdisciplinary higher education. More generally, she is interested in theoretical understandings of gender and international politics, the impact of war on women, and feminist analyses of surveillance.

Jillian completed her PhD in LSE’s Department of International Relations in 2016 under the supervision of Professor Kim Hutchings. Prior to joining the LSE, Jillian received her MA from Carleton University (Ottawa, Canada) and BA (Honours) from Memorial University (St. John’s, Canada). She was funded for both her MA and PhD research by the Social Sciences and Humanities Research Council of Canada (SSHRC) and was a Commonwealth Scholar from 2011 to 2014 while completing her PhD. Recently, Jillian’s work has been published in the International Feminist Journal of Politics and by Oxford University Press in Gender and Private Security in Global Politics.

Dr. Chris Blunt is Assistant Professorial Lecturer at LSE and Deputy Director of LSE100, LSE's flagship interdisciplinary course taken by all first and second year undergraduates. He is a philosopher of medicine, whose work focuses on approaches to evidence in medicine, randomized controlled trial design and methodology, and the challenges of interpreting evidence and translating results in clinical practice.

Chris's work employs case studies from a range of disciplines including oncology, vascular surgery and paediatrics, to explore the ways in which the conceptualisation of evidence in Evidence-Based Medicine shapes the kinds of information practitioners value, access and apply.