With over 2.5 million jobs lost in the past four months, it is an employer's market. I myself have a number of friends looking for work, a search no doubt made more difficult by the following fact: According to the 50,000 respondents of the General Social Survey, we young people are a self-admitted group of huge slackers.

It's understandable, however, that we have little time left for work, as apparently we spend all our time having sex and watching TV. (More on that later.) 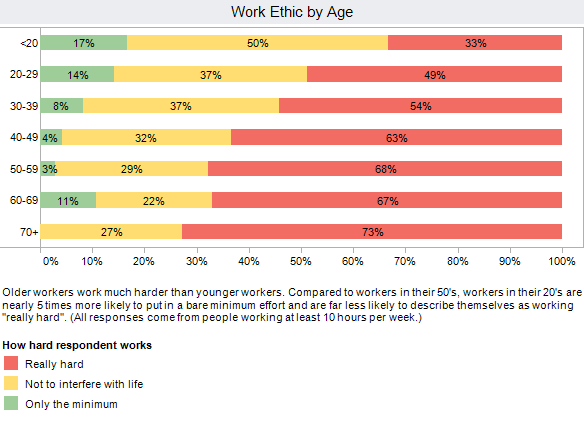 So what are these younger workers doing with all their free time? Well, one thing they're doing is having sex. Remember this chart from Lose Your Job, Improve your Sex Life?

Oh, and then there's TV, of course. Time spent watching TV is at a near high for teenagers and decreases steadily with age, right up until retirement age when TV viewing spikes again. With all the time they're spending having sex and watching TV, it's no wonder that young workers don't have much time left for the office. 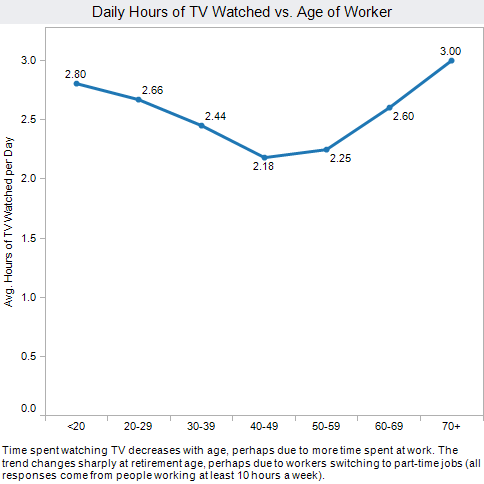 It should be noted, however, that there is a cure to this idyllic lifestyle, and it's called marriage.

According to the survey responses, the stereotype of spouses who spend all their time at the office is more than just a cliché, it's a fact of life. Married respondents rate themselves as working far harder than never married respondents, though still not as hard as those whose marriages have ended. (For you nitpickers, the trend does hold even after controlling for age.) 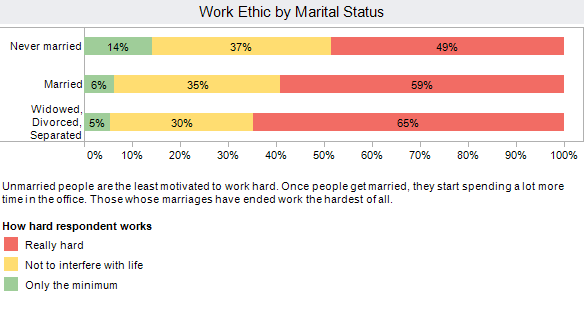 So what's the moral of this story? Well, there are several perspectives to consider.

As an employer, there's little you can do to make your young employees age faster. But maybe you can get them married off. Perhaps a subsidized matchmaking program?

If you're young and single, well, enjoy it while it lasts. And perhaps take your employer's new subsidized matchmaking program with a grain of salt.

And for those of you who are happily married? Well, we would never suggest that your employer is rooting for your marriage to fail just to get a few more hours of work out of you. But just to be on the safe side, maybe you shouldn't show them this article.