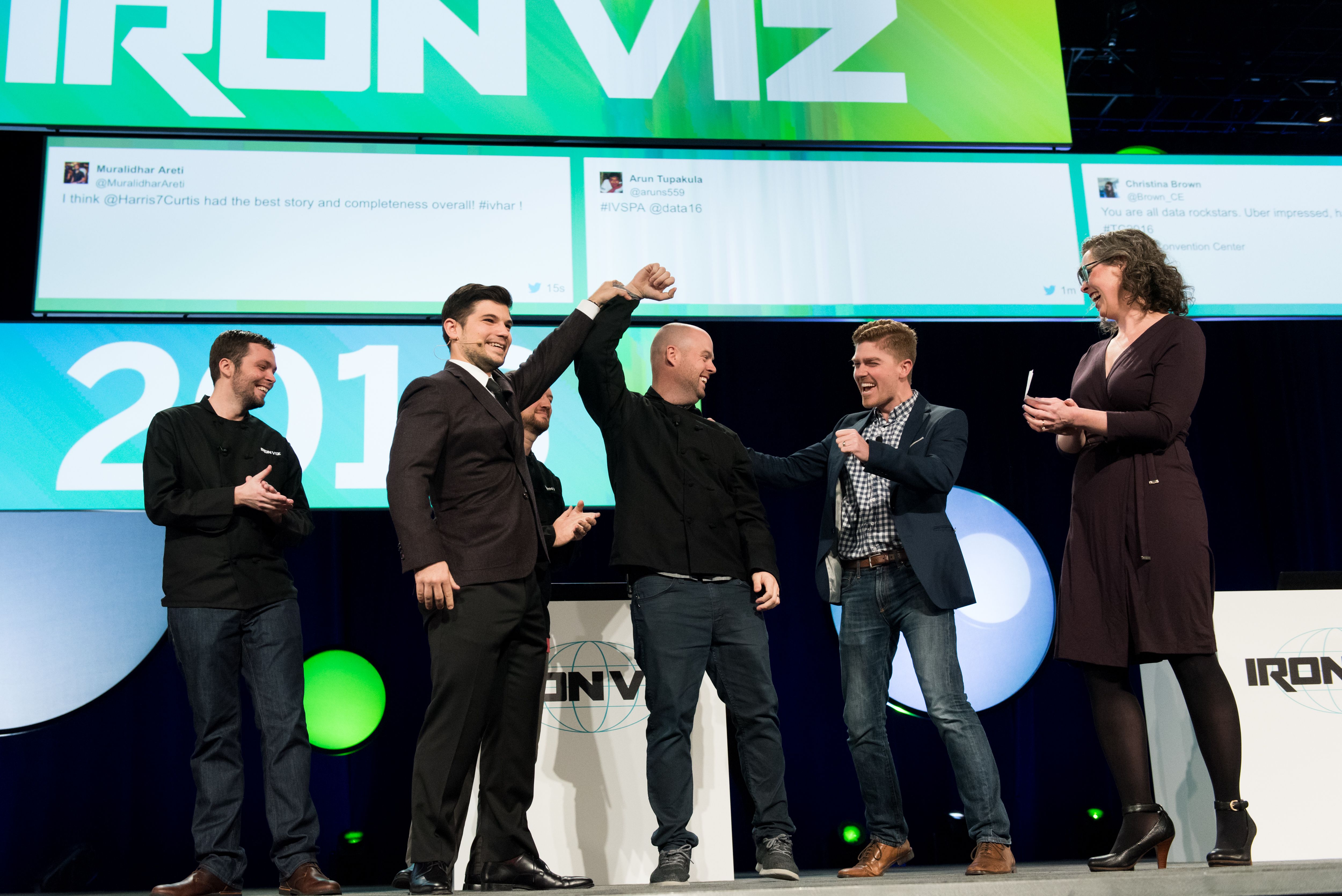 Note: The following is a guest post by the newly-crowned 2016 Iron Viz champion Curtis Harris. Click here for a recap of the fierce competition.

Since watching John Mathis win the Iron Viz Championship in 2014, I've been totally enamored by the competition. The speed, precision, and thought put into these competition-level dashboards amazed me, and I knew that I had to get on the stage one day.

Even though Iron Viz was a goal of mine after TC14, I by no means had the skills to be on the stage at the time. Over the next couple of years, my professional role would expand, and I'd start participating more and more in the Tableau Public community. It was through those experiences that I was finally able to put together a viz that earned me a chance to compete in Viz Stadium!

The feeder competitions are fierce, but no matter what your current skill level, you, too, can work your way to the Iron Viz stage. And when you do, use these tips to propel you to the top!

In 2015, Shine Pulikathara put together a timeless Tableau viz to take home the Iron Viz championship. After winning, Shine put out a great guide to help Iron Viz contestants win the competition. I personally read Shine's post at least three times before the competition, and especially keyed in on points 6, 7, and 8.

2. Build relationships in the community

In the Iron Viz competition, 10% of your final score comes from the audience in Viz Stadium. Although the final tallies are never revealed, I have to think that the audience vote truly helped me seal my victory.

As I mentioned in the introduction, I spent the better part of two years building relationships and collaborating with a wide variety of people in the Tableau Public community, many of whom put in a vote for me in Austin.

Having friends in the right place at the right time doesn't hurt. Your competition is also very good at Tableau, and you can't afford to lose the audience vote. A great way to get to know the community is by participating in the weekly Makeover Monday exercise.

Here I am with Ann Jackson on the plane to Austin. Ann was one of the amazing people that voted for me during the competition.

Read the blog posts written by previous contestants and winners. They each have a unique perspective on the experience. Reach out to previous winners and contestants who'll be more than happy to provide some advice. And watch the previous competitions over and over. I watched the 2014 & 2015 Iron Viz Championships twice before arriving in Austin.

The more you know about what it takes to be on the stage and what it takes to win on stage, the better your chances will be of actually winning. Also take time to study the judges and what they might be looking for in a champion. If history follows suit, I might be judging your viz in 2017 (hint, hint).

4. Be ready before the conference starts

I understand that not everyone can pull off this step, but if you can have a solid plan of attack pre-conference, you are already in good shape. Take a couple days off of work the week before the conference to: build a pristine dashboard, time-bucket every single step, and at least give yourself a rough estimate of how long it is actually going to take to build.

If you are lucky enough to nail this step, your overall experience is going to be much less stressful. Take pride in the fact that all the people you meet will comment on how relaxed you seem with so much on the line.

5. Enjoy the conference even if you aren't ready

Repeat after me: I will not lock myself in my hotel room. Say this to yourself over and over as the conference nears closer.

Tableau Conference, to most of us, is one of the highlights of the year. While you will surely spend more time than most in your hotel room, it is important to take the time to go to a session or two and get to know some of the other attendees. What worked for me is to trade off between sessions and practice: go to a session, have a practice session, rinse and repeat. Going to sessions and enjoying the conference will help you take your mind off the task at hand and help you stay relaxed.

6. Don't stress about it

If you haven't noticed a theme by now, go back and read steps 3 to 5. Each one of those steps above led me to a very stress-free event, which led me to be composed during my presentation, which ultimately led me to victory. By successfully preparing and removing stress, the stage will be much less intimidating, which will make the competition much easier to win.

7. Get to know your sous vizzer

You see the super-excited guy in the picture below? No, not me; the other guy. That is Zane, my sous vizzer, and he was absolutely critical to securing a victory.

Zane and I had a few good conversations that really helped solidify the story I wanted to tell. You'll quickly find that your sous vizzer wants to you to win Iron Viz just as bad as you do, and neglecting their help would be a big misstep. I wouldn't have won without Zane, I can guarantee you that.

The keynote stage, wow. What an honor to share the stage with Tableau's leadership, developers, and some of the greatest speakers in our country.

The stage is large and so is the crowd, and if you aren't one for public speaking (I'm not) then you'll need to learn to tune out the stage. Your fingers might feel a bit larger, more jittery, and less functional when the clock is ticking. But build the viz you've practiced over and over again and the stage/crowd will melt away. Don't worry if you don't have the presentation skills of Bill Nye; all you need to focus on is telling your story.

I rewatched the competition with my wife when I got home and continually told her that I don't remember saying any of those words. This tells me that I was in the zone on stage, and had a very narrow focus on the task at hand. Let the stage bother you, and you let the championship slip away.

9. Relate to the crowd

Above all things I did well, I think the best was placing the crowd in my story. I asked the crowd to not think of themselves in a taxi, but to think of the people that are giving them their taxi ride. Many of the audience votes that came through talked about how they loved hearing a different side to the story than what was expected. If you can, giving the Iron Viz data a human element is going to help you tell a strong story. If you look at the last three winning vizzes, you'll notice a trend in what works well with the crowd. In my opinion, the crowd absolutely needs to relate to your story.

Last but definitely not least, try and understand what your competition might bring to the table and then differentiate yourself.

When I first opened the data set, my eyes went right to the geographic data; everyone loves a map. I figured my opponents would have a strong mental pull to do a map as well, and I used that information to go a different route. This is certainly risky, but if you can successfully take a different angle while your two opponents pull together similar elements, you'll position yourself for the win.

Also, give yourself time to incorporate whatever features are new at the time of the conference. My dashboard was relatively simple, which gave me time to incorporate a mobile view as the clock was nearing zero. Using the Device Designer feature was one more way I differentiated from Robert and Russell, and after reading some of the crowd tweets, I know it was the right decision.

‘Tis a tough one…but my vote goes to a great story along with the “mobile” twist! @curtisharris #IVHAR#data16 #IronViz

I would also like to thank my new friends Robert Rouse and Russell Spangler for making this experience one to remember. Even though I ended up winning, I still feel like the underdog to these two amazing vizzers. It was truly great spending the better part of Wednesday getting to know both of them and their sous vizzers. This may be biased, but I think our Iron Viz Championship is the one to beat!