Where does your data live? Introducing the Cloud Data Brief

From individual databases to cloud, on-premise, and hybrid deployment options, the data landscape is a labyrinth of choice. The market is full of innovation, and new databases, Hadoop tools, and cloud-hosting solutions are emerging on what can feel like a daily basis.

How are businesses adopting these new technologies? Analysts provide a high-level perspective on market trends, but data on actual use of products and deployment types is hard to come by.

To help understand how real businesses are navigating the data landscape, we’ve taken a look at our own platform and analyzed how our customers choose specific database products and deployment types. Using a sample of one million+ anonymous data source connections published in Tableau Online by our 4,000+ customers, we’ve parsed out the usage patterns and trends shaping the data landscape.

Today we’re releasing our findings in the Cloud Data Brief.

Tableau Online customers are located around the world. They span nearly every industry, and vary from small businesses to enterprise corporations. The analysis in the Cloud Data Brief includes them all, and we believe it serves as an accurate indicator of broad trends in the market.

As you navigate the diversity of choices and capabilities available in the market today, we hope our findings will help inform your organization’s own data strategy.

What does the data show?

Here are a few of our favorite findings from the report. For the full breakdown, head to our Cloud Data Brief page.

1. The data landscape is diverse

Tableau Online customers employ a diverse mix of data sources for their analytics. Even with file-based sources like Excel and web applications like Salesforce excluded, there are 32 distinct types of databases and Hadoop products used by customers. Two-thirds of these data source types are more frequently deployed in the cloud than on-premise.

2. Data gravity is shifting to the cloud

Over the past 15 months, Tableau Online customers increased connections to cloud-deployed data sources by 28%. In January 2015, data source connections were split 55-45 cloud to on-premise deployment. By the end of 2015, that split had shifted to 70-30. 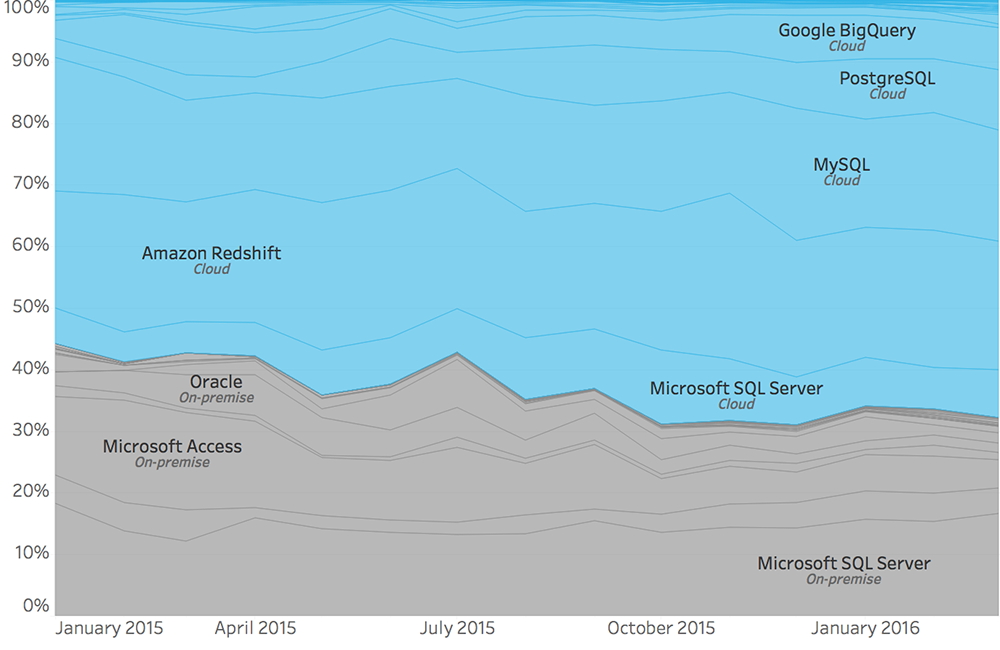 Connections to cloud-native data sources like Amazon Redshift and Google BigQuery are gaining market share. At the beginning of 2014, they represented just 12% of all connections in Tableau Online. By the first quarter of 2016, they had grown to 28%.

But hybrid data sources—those that can be deployed on-premise or in the cloud—remain, by far, the most common type of connection used by Tableau Online customers. Over the past two years, hybrid sources have never dropped below 60% of all connections. 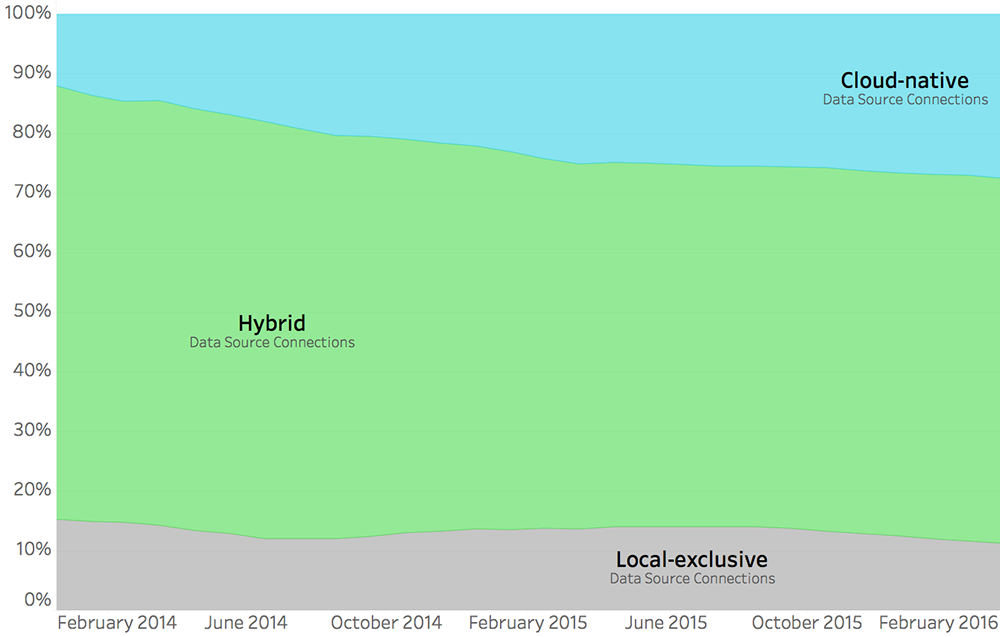 4. Hybrid deployment edges toward the cloud 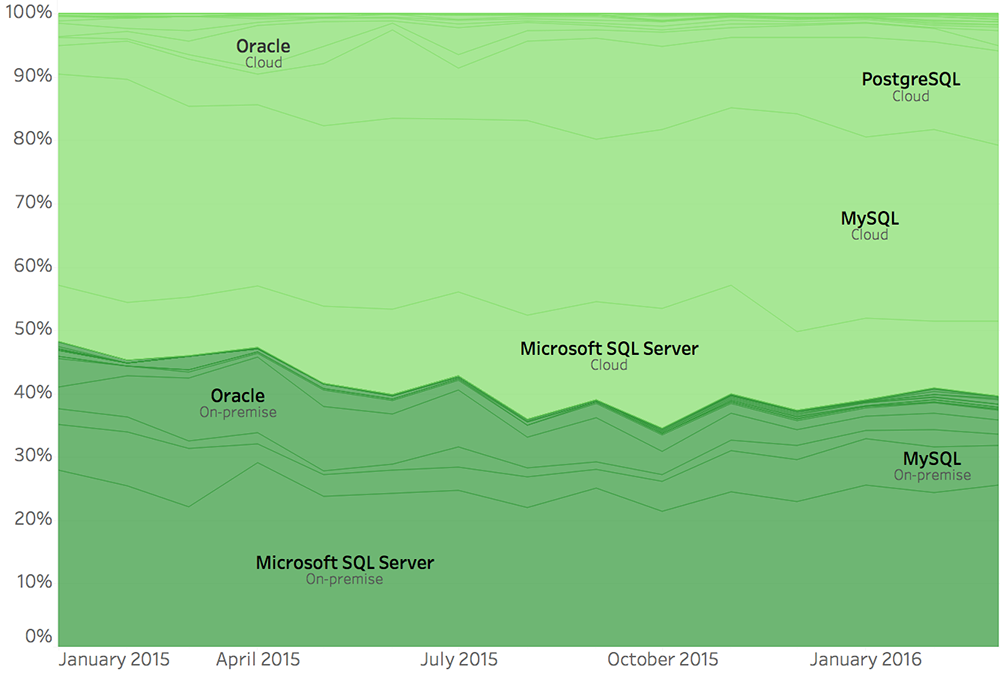 5. Open-source and cloud: A match made in heaven 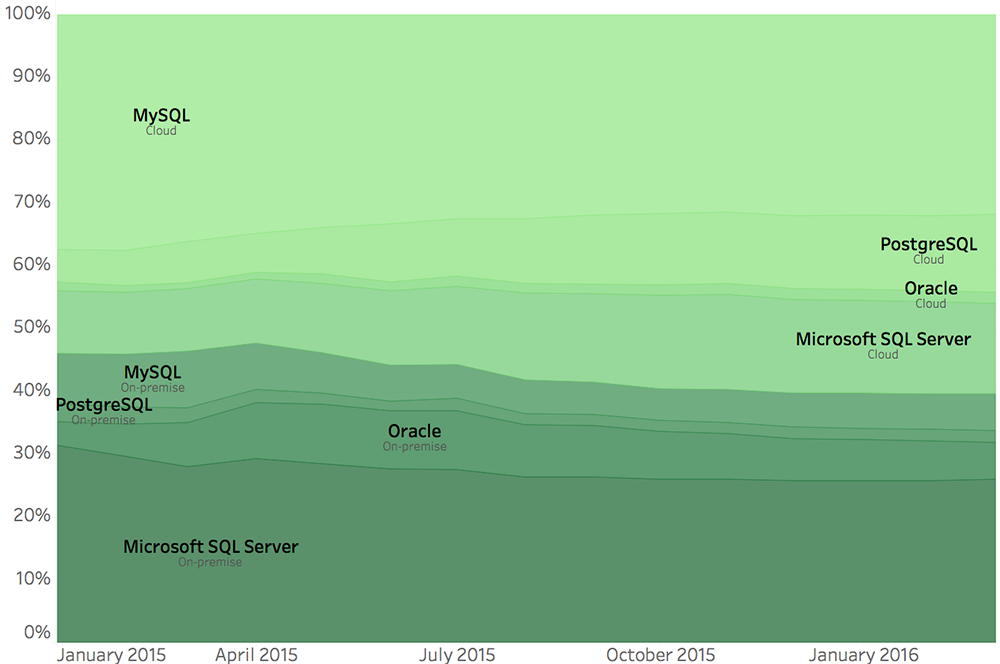 Get the full Cloud Data Brief for more in-depth visual analysis of these trends and how they apply to businesses using data for analysis.

Still data-hungry? The next release, coming this summer, will explore how Tableau Online customers use cloud platforms like Amazon Web Services, Microsoft Azure, and Google Cloud Platform to host their data used for analysis.