Let’s set the record straight. Providing women and girls with equal access to education, health care, decent work, and representation in political and economic decision-making processes is important for the world. Societies have advanced their gender equality and women’s empowerment initiatives, but women and girls continue to suffer from discrimination and violence. And this needs to change.

Equal Measures 2030 (EM2030) is a joint effort of leading regional and global organizations from civil society and the development and private sectors working to connect data and evidence with advocacy and action on gender equality. This coalition includes partners like the Bill and Melinda Gates Foundation, KPMG, ONE Campaign, Asia-Pacific Resource and Research Centre for Women (Arrow), Data2X, Plan International, and others. Their mission is to ensure girls’ and women’s movements, advocates, and champions have access to the robust data and evidence they need when they need it, in an easy to use format so they can drive faster progress towards the gender equality commitments in the Sustainable Development Goals (SDGs). Data—especially about the lived realities of girls and women, about what is working and where we’re falling behind—has the power to guide and drive ambitious policy, hold governments accountable, and to change laws, policies, and budget decisions needed to eradicate gender inequality.

In 2015, world leaders from 193 countries committed to achieving gender equality by 2030 for every girl and every woman when they signed on to the United Nations Sustainable Development Goals (SDGs). On June 3 at the 2019 Women Deliver conference, Tableau Foundation partner EM2030 released the SDG Gender Index, the most comprehensive accountability tool available to explore gender equality in 129 countries aligned to the UN’s SDGs.

The Index, displayed through interactive data visualizations using Tableau technology, is now accessible on EM2030’s Gender Advocates Data Hub, an online platform designed for advocates working to encourage countries across the world to make faster progress on gender equality laws, policies, and budget decisions. There you can explore their data visualizations, compare country performances across regions, explore the SDGs based on thematic areas of interest, and read about the girls and women who are using data to drive action in their communities. 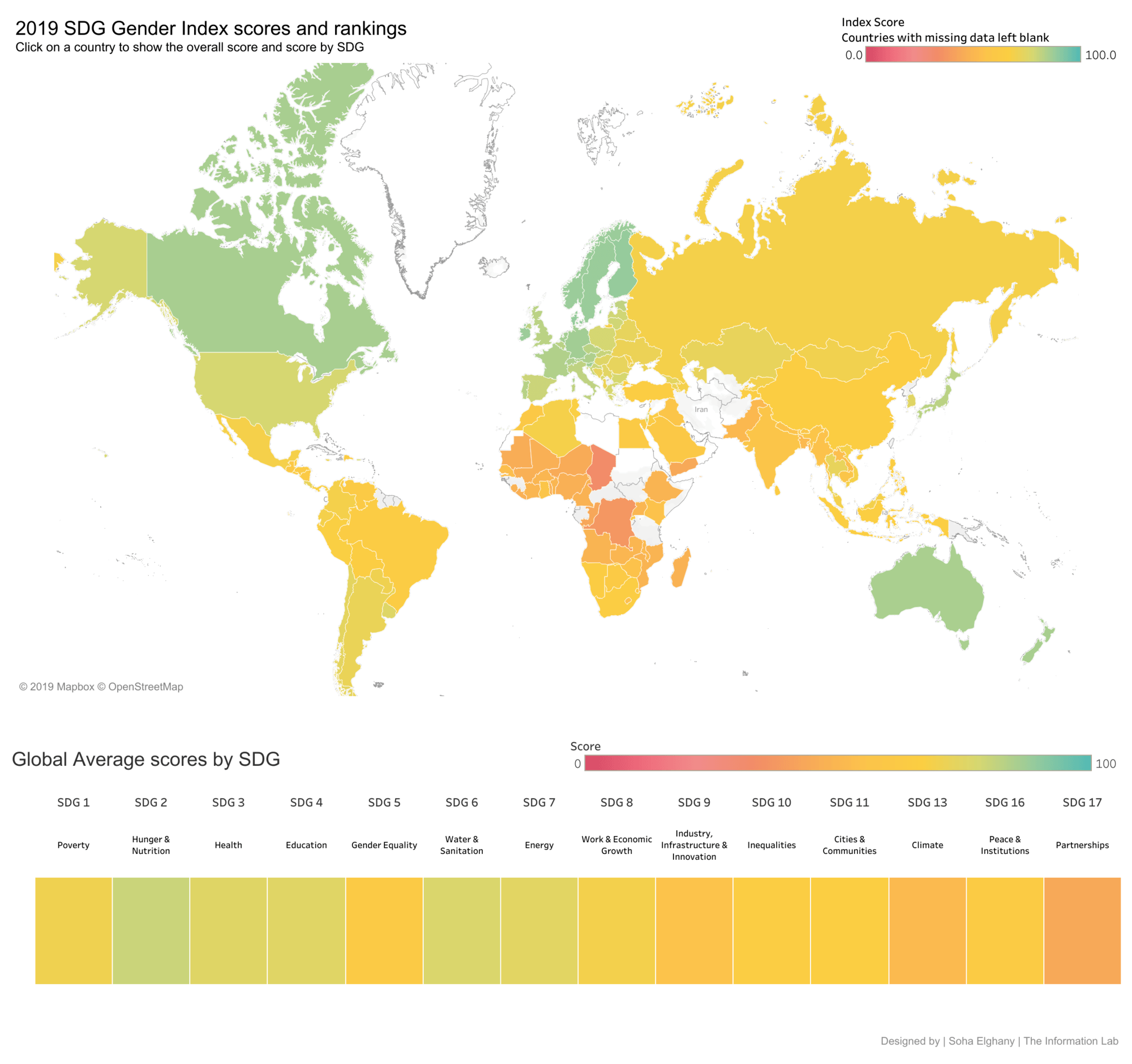 “We believe that data has real power when it is in the hands of advocates who are working to drive change on gender equality in their countries and on the issues they care about,” says Alison Holder, Director of Equal Measures 2030. “We know that data can drive accountability, bring light to hidden issues, spark debate, and tell the story of progress for girls and women.”

The Index took shape by EM2030’s work with partners across seven initial focus countries—Colombia, El Salvador, India, Indonesia, Kenya, Senegal, and Tanzania —as well as dialogue with thousands of other stakeholders worldwide. Its development formed from the findings of two formal surveys: one with more than 100 policymakers and the other with more than 600 gender equality advocates. Together, these surveys increased their understanding of the demand for gender-related data and the inherent challenges and opportunities in connecting such data with advocacy and action for gender equality.

The 2019 SDG Gender Index covers 14 of the 17 SDGs, measures 129 countries in five regions on 51 gender-equality issues ranging from health, gender-based violence, climate change, decent work, and others. The next iteration of the Index will launch in 2021 and have regular updates every two years until 2030.

“All over the world, we’ve seen that the most effective advocates are those that use data to frame complex problems as local, accessible, and solvable,” says Neal Myrick, Global Head of Tableau Foundation. “Equal Measures 2030 has done a terrific job designing the SDG Gender Index and Gender Advocates Data Hub to really help local leaders make a meaningful difference in the lives of women and girls.”

Leveraging data and analytics in advocacy

EM2030 held training for national partners on how to use and interact with data from the Index to fuel storytelling and advocacy during the Women Deliver 2019 Conference. They also held media training for over 100 journalists from Women Deliver who have a huge role to play in developing stories, interest, and attention to the issues of gender equality. Partners will roll out training in their own countries, demonstrating how to use the data to inform and make a strong case for advocacy.

“We want our data to be truly accessible to advocates and gender equality champions, whether they’re in the United States or Kenya, and whether they’re pushing for equal pay, ending gender-based violence, ensuring financial inclusion or any other issue affecting the rights of girls and women,” says Holder. “Tableau is helping us move away from charts, tables, and static graphs to tap into technology so we can easily track progress and ensure governments deliver on their promise of reaching gender equality by 2030.”

We are honored to join with EM2030 on this journey towards greater use of data advocacy. We look forward to helping them bring the power of accessible, easily understood, and compelling data to advance the rights of women and girls all over the world.