The importance of design thinking is crucial when communicating the right information to a business in a simple and constructive manner. Dashboards are one of the most common communication channels used by businesses to share data insights, delivering key information most effectively. But how do we ensure an audience is drawn to the right areas of each dashboard?

In a bid to understand how humans react to dashboards, Tableau ran an eye-tracking study to better understand how common design elements draw visual attention. The goal was to observe how people “naïvely” viewed a dashboard they’ve never seen before. From these observations, we wanted to identify common patterns and phenomena that could inform future user research.

The study in action

We posed a number of hypotheses about how people look at dashboards, broken down into two assumptions. First, we assumed people would be compelled to look at certain design elements on their screen, no matter their location in the dashboard. We expected to see lots of visual attention on common dashboard elements such as line graphs, maps and icons.

Second, we wanted to see if people would display a propensity to “read” a dashboard like a text-based web page. Other forms of digital media have established that visual attention tends to follow an F-Pattern, which is defined as the propensity for humans to consume web pages in an “upper-left > bottom-right” pattern. We wanted to see if people would produce the same F-type pattern on our dashboards.

What did we analyze?

Much of the analysis relied on looking at the distribution of eye movements across all dashboards in aggregate. Areas of interest (AOIs) were created for each dashboard to allow aggregation and comparison across dashboards.

There are two categories of dashboard AOIs:

Results from the study were not altogether surprising. Much of what we found conforms to standards of visual and user experience (UX) design theory. However, there are a few important things to note:

The next step will be to take a longer look at big numbers. We found there were a number of variables that may (or may not) affect the visual attention we saw in this area:

The big numbers in this dashboard were moved from the top to the bottom. Everything else stayed exactly the same. Would people still pay as much attention to the numbers were they moved to the bottom of the dashbord?

Size: How much does size matter? How much do we need to increase the font on a big number to draw the eyes?

The big numbers in this dashboard were increased in size. Everything else stayed exactly the same. Would people pay more attention to the big numbers on the dashboard on the right compared to the left?

Contrast: How much does the visual contrast matter with a big number? If we take away strong contrast, will that affect visual attention?

It’s also interesting to consider what might happen in a study where user intent is manipulated based on the dashboard elements. For instance, take the effect a big number has on visual attention. When a big number was on screen with another salient element (a map, for example), we observed distributed attention – viewers looked at the big number and the map. 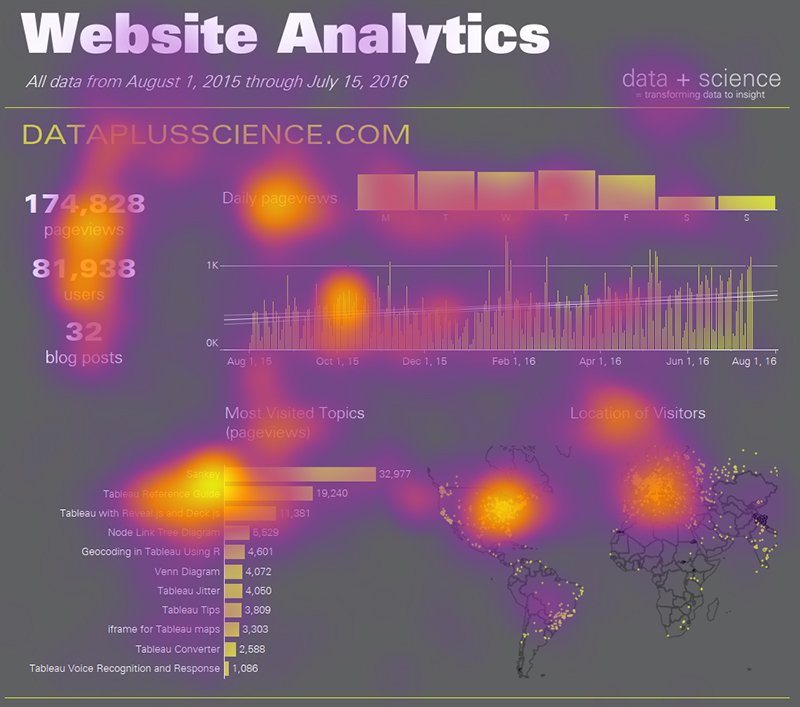 But what would happen if the task directs the person to look at the big number? For example, how many page views did the website get? We would expect to see even stronger visual attention to the big numbers. However, will we see all visual attention disappear from the map? Perhaps this would be the case, but we don’t know yet.

Our research is intended to help open up new industry and academic lines of investigation into how people look at data visualizations in dashboards. Instead of investigating how people look at single data visualizations (A. Borkin, 2015), we want to better understand what happens when visualizations are working in concert with each other in a dashboard. And we want to better understand how these dashboards work in context and in real-world scenarios. Our hope is that these insights will guide our customers in their quest to deliver data to others.

Given what we’ve learned already, Tableau can offer a little advice for how to design great dashboards:

Above all, we found that it’s possible to predict where people will look on a dashboard. Because of this, we hope this research helps take some of the mystery out of your dashboard design process.

Check out the full eye-tracking study or explore the data around time to first fixation and fixation duration.