Convert the version of your Tableau files with this handy tool

Note: The following is a guest post by Tableau Zen Master Jeffrey Shaffer. Please note: This tool and the outlined processes are not supported by Tableau.

I convert Tableau files from one version to another version quite frequently. From students at the University of Cincinnati to people at the office, to working on the Big Book of Dashboards with various people from around the world, I've had to convert all sorts of Tableau files.

I find that more often than not, it's just a single version of Tableau. For example, someone is on Tableau 9.2 when the current release is Tableau 9.3. But sometimes it's a few releases off.

When opening a newer file in Tableau, there is a warning message. 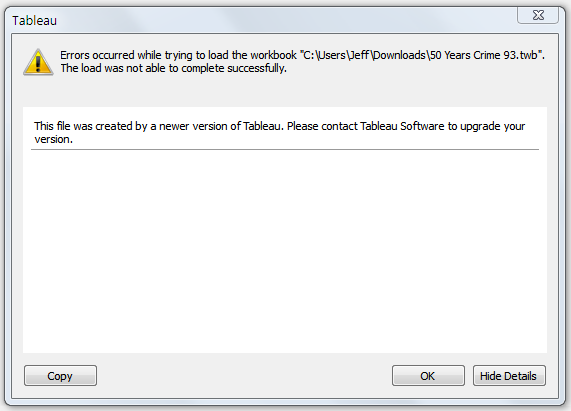 This can often be resolved by hacking the TWB file, which is an XML file. There are two places where the version is set: the workbook source and the database source. This isn't foolproof, as the structure of the XML can change from version to version as new features are implemented. However, I've had pretty good success with this, especially when converting from releases that are close to each other.

I decided to create a web-based conversion tool. This tool opens a TWB file in memory and loads the contents in a window, converts the version of Tableau, then saves a new TWB file. Click here or the image below to try it. 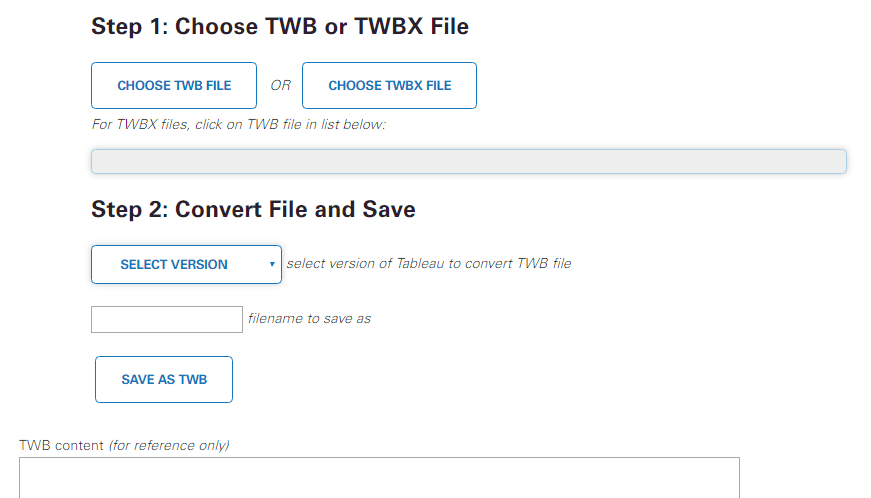 How to convert a TWB file

First, select your TWB file, for example a TWB in Tableau 9.3. The TWB file will show in the text window.

Next, select the version of Tableau that you wish to convert it to from the drop-down box. The TWB file will be modified.

Finally, click the Save button to save the new TWB file. The new TWB file will be downloaded into your download folder appended with the name "[your file name] Tableau v9.x]." So just open a file, select your version and then save.

This is really simple and even works on a mobile device, taking a TWB file from Dropbox. When you open, you might have to repoint to the data source, depending on what it is.

How to convert a TWBX file

TWBX files are zip files. They contain a TWB file along with the data files and images. This requires one additional step once you have the TWB saved.

Note: I have added functionality for Tableau 10, but it's still in beta. I have tested various conversions, different connection types and multiple connections. This may change with future releases, as new functionality in the XML or other changes may affect the conversion.

I hope you find this information helpful. If you have any questions feel free to email me at Jeff@DataPlusScience.com.

For more tips, tricks, and vizzes by Jeff, visit his Tableau Public page, check out his blog and connect with him on Twitter @HighVizAbility.