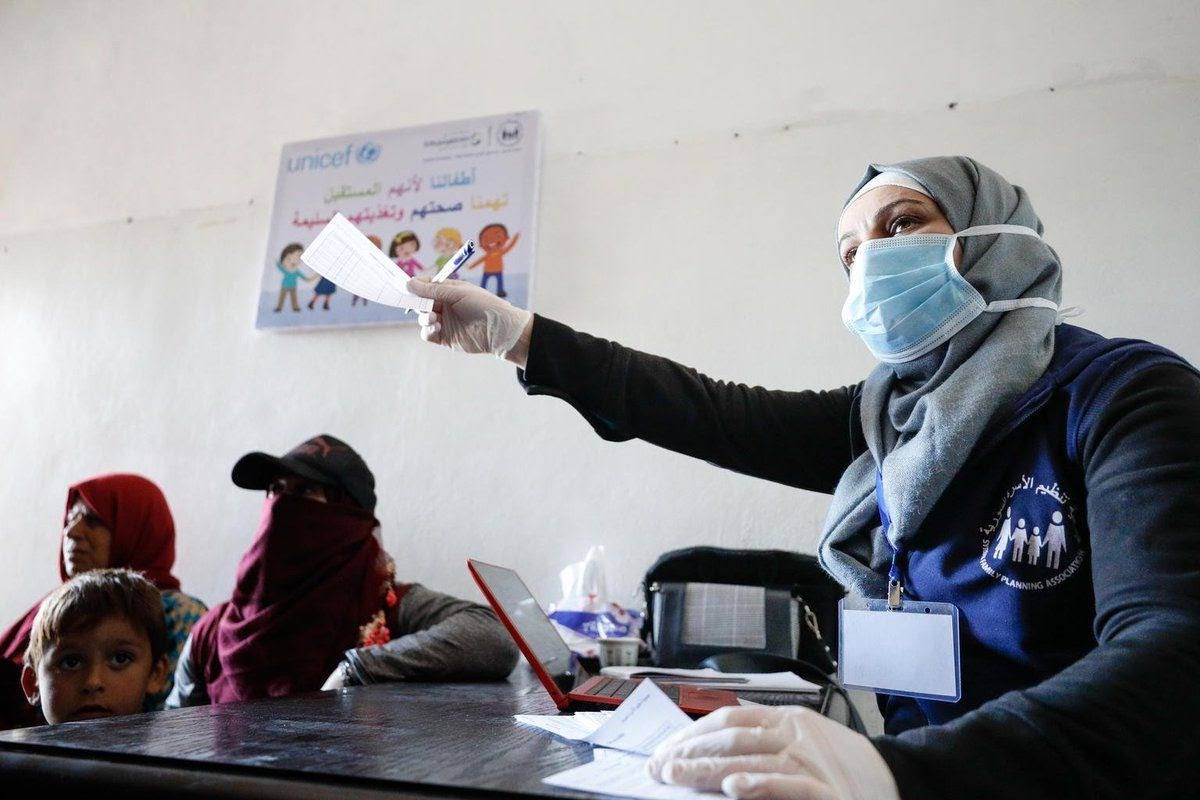 There is hardly any community or any group of people that is unaffected by COVID-19. But as the data becomes clearer around the severe economic impacts of the pandemic, one thing is certain: Across the world, women are shouldering an unequal burden.

At Tableau Foundation, we partner with numerous organizations that are using data to call for action on women’s rights, equality, and empowerment. It’s a nearly universal truth that in many countries, these aims were already in a precarious position. In communities across the world, the data from our partners like Equal Measures 2030 and The ONE Campaign shows that progress on gender equity has been uneven and slow. Now, the concern is that COVID-19 is threatening to undo what gains have been made, and cause a backslide.

I speak for myself, our partners, and many others organizations and individuals across the world when I say that we can’t let this happen. While the pandemic is still underway and the complete picture of its impacts is still far from fully formed, we can look to the data we already have on women’s economic and social vulnerability to understand what additional burden COVID-19 might add. And as data people, we need to be especially vigilant in continuing to collect, analyze, and share data on these burdens as it evolves to ensure that the progress over the last decades is not lost.

Before COVID-19, women were already facing an uneven landscape

Our partners at Equal Measures 2030, an organization using data to advocate for progress on gender equality, emphasize that, even before COVID-19, the majority of countries were not where they needed to be to achieve the five gender equality measures in the UN’s Sustainable Development Goals by 2030.

EM2030 recently released a report outlining the current state of progress toward gender equity. Over half of the 129 countries they analyzed are not on track to achieve any of the five gender-equality SGDs in the next decade.

COVID-19, writes EM2030 director Alison Holder, could set countries back decades on gender equality. Especially in countries where progress on women’s equality was slow already, there’s a risk of losing sight of the need for progress at the expense of other critical priorities COVID-19 has brought to the surface. But there’s an opportunity to put a gender lens on the data we have on the impacts of COVID-19, Holder says, so we can put the people most at risk at the core of recovery, and use the rebuilding effort to accelerate—not reverse—progress toward equality.

Let’s dive into what the data shows us on how women are being impacted by COVID-19, so we can understand where to target efforts going forward:

Women’s economic and employment security is threatened by COVID-19

According to the UN Foundation, women are far more likely to work jobs that are being hard-hit by the pandemic: hospitality, food service, education, retail, and the travel sector. They also make up 67% of the global health workforce, so they’re disproportionately on the frontlines. And 70% of all informal work—jobs like domestic care and home nursing aid, which are often underpaid, contract-based, and lack benefits like healthcare—is done by women. As researchers at Brookings note, women who run or work in informal businesses in Africa are already reporting lost wages because of the broader economic downturn, and because they’re finding it harder to work with resources like school and childcare gone.

Underneath all of these employment difficulties is the basic fact, Holder says, that women are still compensated far less than men for similar work, and often have less access to higher-paying jobs. COVID-19 also poses a threat to countries achieving equal pay. Holder points out that we’re already seeing troubling signs of backsliding here: In the UK, for instance, companies have been given a “pass” on having to report gender pay discrepancies because of the crisis.

It’s not hard to look at the data and feel that backsliding is inevitable. But our partner organizations say that if the data is put to action to advocate for systemic change, COVID-19 could become a pivotal moment in accelerating progress toward equity. With so many people’s jobs, safety nets, and pay compromised, now is the time for leaders to look at the data and figure out not just how they could make up the losses, but create a system where the impacts are not so acutely and disproportionately felt in the first place.

The pandemic could impact equity in education for a long time

Two years before COVID-19, our partners at The ONE Campaign created a series of visualizations showing the toughest places in the world for a girl to get an education. Countries that face the deepest economic challenges also show the starkest divide in access to education along gendered lines. David McNair, ONE’s executive director of global policy, says that there’s an enormous risk that countries where girls already struggle to receive an equal education will become an even tougher landscape following the pandemic. 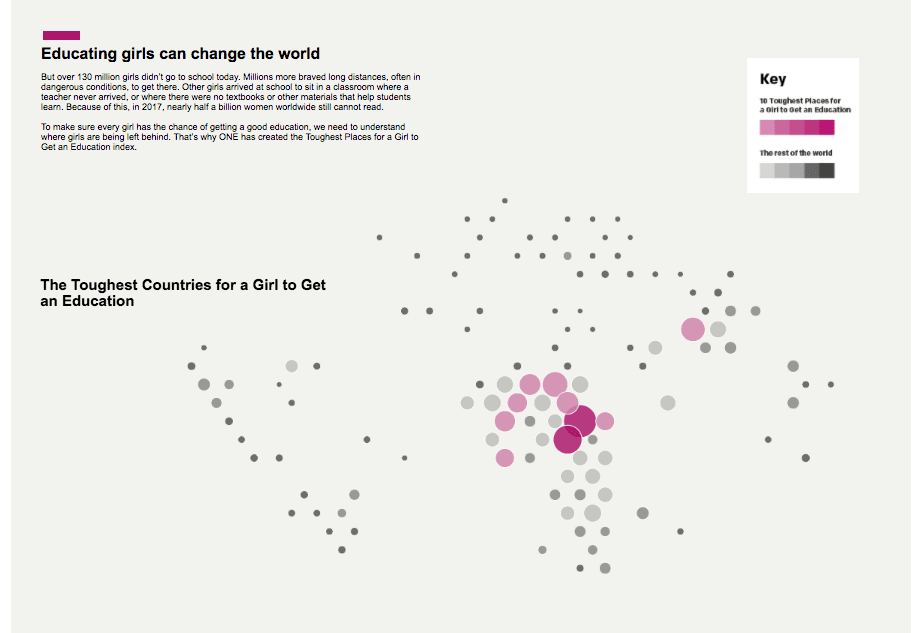 Our partners at UNICEF have been tracking school closures due to COVID-19, and according to data from the Center for Global Development, 69% of education providers feel that girls will be far more negatively impacted by these school closures than boys.

Especially in countries already dealing with pervasive poverty, McNair says, we could see a rise in girls being unable to return to school. More may be married younger as families struggle with finance. When girls are married young, their education is cut short—and that could have a cascading, backsliding effect on women’s entrepreneurship, financial independence, and leadership, all of which could take years to build back.

Backsliding on girls’ rates of completing their education could pose enormous challenges for gender equity overall, according to EM2030. Over the past two decades, the percent of girls who completed secondary school rose from 43% to 59%. COVID-19 is showing how fragile this progress is, but our partners feel strongly that leaders have an opportunity to use data to identify where girls’ education is most at risk, and to respond to what communities say they need to enable girls to remain in, and finish, school.

Our partners all express concern that due to COVID-19, gender-based violence will increase. “Where movement is restricted, people are confined, and protection systems weaken, women and girls are at greater risk of experiencing gender-based violence,” the UN reports. But at the same time, the services dedicated to responding to these crises are “reduced as resources are diverted to respond to the overall health crisis.”

Additionally, according to EM2030, data on gender-based violence is notoriously difficult to collect and track over time. “We know that risk has gone up for people in households where domestic violence was already present, because they’re trapped with the perpetrator,” says Albert Motivans, EM2030’s head of data and insights. Typically, also, spikes in unemployment correlate with an increase in domestic violence. But concrete data is hard to come by. EM2030 analyzes volumes of calls to crisis hotlines, but Motivans notes that call volumes might not reflect the true severity of the increase, even as violence rates go up, because women might lack a safe space from which to make a call. Even so, the UN reports that Argentina has seen a 25% increase in emergency calls related to domestic violence during the pandemic, and in France, domestic violence rates are estimated to have gone up 30%.

Anne Connell, senior data advisor at EM2030, says that advocacy organizations and researchers need to think about how to collect more accurate data on gender-based violence. There have been efforts to convert to mobile surveying and response, but that’s difficult, Connell says, if partners share a device. And even if they have their own device, lack of privacy and concern for their safety could still pose a legitimate challenge to women responding. However, we’ve also learned from our partners at Operation ASHA, an organization in India focused on ending tuberculosis, that increased health outreach around the pandemic can create a unique opportunity to collect data on issues like domestic violence and mental health. As Operation ASHA providers conduct home visits and health services around the pandemic, they have also begun connecting patients with resources and support for these other issues, and more health agencies could do the same.

Even though data may not capture the full extent of this crisis, we know enough to know that it can’t be ignored. Our partners are advocating for response strategies that consider the rights and safety of women and girls as essential, and direct funding toward expanding response services and legal protections.

Building back with a lens on women’s empowerment

Lack of equity, economic disempowerment, barriers to education, gender-based violence: We all know that these were significant problems before the pandemic. “Now we’re seeing how critical it is that we have the data to show what’s going on, we can bring that focus and awareness to the idea of building back better,” Motivans says.

There are two directions in which COVID-19 could point the future of women and girls across the world, Holder writes. It could, in just a short time, undo the progress that countries have made toward gender equity, and set equal opportunities for women and girls even further out of reach. Or, “COVID-19 could be the watershed we need to upend the systems that hold girls and women back,” she writes.

Our partners all recommend a suite of policies and actions to ensure that the second outcome is the one that emerges from the pandemic. From UN Women to The ONE Campaign to EM2030, our partners say that governments and organizations need to take a broad but targeted approach to prioritize the needs of women and girls amid the pandemic. Some key recommendations include:

This is far from a complete list, and it’s important that leaders everywhere assess the needs in their community through a gender-equity lens to determine funding and policy priorities. The way to do that is with up-to-date, wide-ranging data on the impacts women in particular are facing. Our partners are using this data to design advocacy campaigns and work with governments and organizations around the world to advance equity for women and girls throughout the pandemic. As a data company, we are proud to support this work and advocate for the continued use of facts and information to understand the disparate impacts of this outbreak and work to address them so we don’t lose the fragile progress we’ve made toward equality.