Last Friday was a special day at Tableau HQ in Fremont: development's Hackathon event. This is when developers show what kinds of wicked things they can cook up when given three days to work on on a project of their choosing. 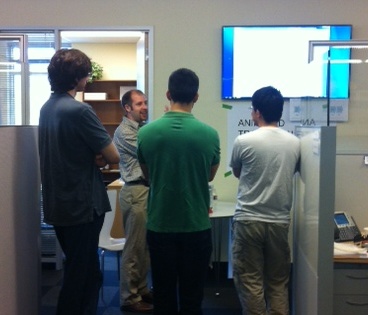 For the week prior, all normal work had stopped while developers hacked away in basements, garages and dungeons (well, mostly they were in their regular offices, but it's more fun to imagine them in secret, exciting locations.) Each developer then presented their hack, science-fair style, while the rest of us watched with wide open eyes and newly expanded minds.

Jeff Pettiross, Senior UX Designer, said "I had a lot of fun getting to set aside all the challenges of responsible development. 'What if we go in this direction?' was a question answered by many hacks." The feedback helped spur more creativity: "We really build on each others' ideas,” he said.

“I got to go do a feature that I wanted to do. I got to be creative, according to my own agenda,” said Austin Dahl, a Development Manager. And on checking out the other developer's work: "There was just so much cool stuff.”

Yes, these are hacks, and they may not work perfectly or be written elegantly. But many of today's features and even product architecture were inspired by earlier hacks, refined with responsible development. Three days is a lot of time to give over to pet projects. But it's invaluable to create a space for new thinking. And it's a hell of a lot of fun to watch.