Tableau is Buzzworthy in Q1

The first quarter of a new year is always a good time to reflect on the previous year’s momentum and help gauge what might be coming in the months to come. For Tableau, taking a look at our press coverage from Q1 is also a great way to gauge momentum and what others expect from us in the coming year.

Growth News
In 2011, Tableau had our eighth year of record growth, nearly doubling sales growth and the adding 160 new workers. We opened offices across the lake from Seattle in Kirkland, WA and across the pond, so to speak, in London. GeekWire, Xconomy and TechFlash all reported on our success and plans for massive growth in 2012. In Europe, Tableau received coverage about its new European Support Center and plans to double its staff in the EU. 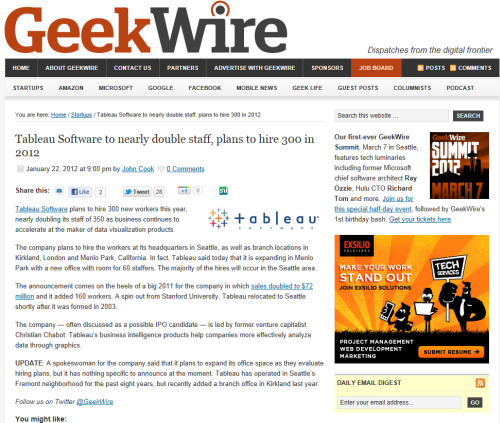 Product News
January was a big month for Tableau as we launched version 7.0. Chris Kanaracus with IDG News Service wrote a great article about the release that was syndicated in publications like ComputerWorld in the U.S. and the UK, IT World in the U.S. and Canada, CIO Magazine, PC World and many others.

February brought Gartner’s 2012 Magic Quadrant for Business Intelligence Platforms which positioned Tableau as a “Challenger.” InformationWeek’s Doug Henschen quoted our own Dan Jewett in his coverage of the report while DBMS2 called Tableau one of the “advanced visualization poster children” and pointed out that Gartner “gushes over Tableau.”

Tableau Public News
Tableau Public continues to become more popular with bloggers and journalists. In January, Journalism.co.uk, a newsletter targeted at the media, named the free product its “Tool of the week for journalists.” We’ll take that!

Customer News
And saving the best for last are the stories about what our customers are accomplishing with Tableau. We're a company driven by our customers so we love to hear about what they're doing. Journalists who cover the BI space also love to share companies’ data success stories. Earlier this month, several editors met with Tableau customers in London to learn about how Discovery Europe, Irish Life, Mindshare and University of Oxford are using the software to get more value from their data. You can read their stories in places like IT World and Fresh Business Thinking UK.