Sparklines - Easier Than I Thought

I recently had to look at a lot of data categories as their values moved through time. I wanted to embed these graphs in a Word document to succinctly and effectively provide visual context to my discussion points. I originally thought I would use one graph with multiple color-encoded lines but realized that it would not be very effective in my document. There were too many lines overlapping each other and you couldn't really discern what was happening for each category.

I remembered what Edward Tufte and Stephen Few recommend - sparklines - and used Tableau to create them quickly and easily.

Edward Tufte has excerpted a portion of his book Beautiful Evidence that presents sparklines, which is available here. To paraphrase, sparklines are simple, compact graphics which display a rich variety of information and are well suited for embedding in the flow of a larger document context.

Creating a small multiple of sparklines is done in Tableau through a series of quick steps. Place the dimension for which you want a sparkline to appear on the row shelf, time (typically) on the column shelf and then the value on the row shelf after the dimension. Remove the axes (by right-clicking on each in the visualization and choosing the option to uncheck "Show Header"). Then use the size slider to make the line a little thinner. You probably then want to resize the row height by dragging one of the row dividers up. I also like to remove the axis lines and reformat borders (by using Format/Borders and Format/Lines from the menu bar). 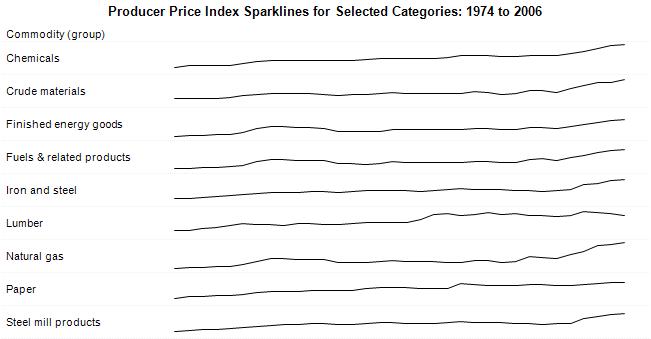 That's pretty much it.

One other thing I did is to color-encode the sparklines with the value just to drive the point home a bit more. 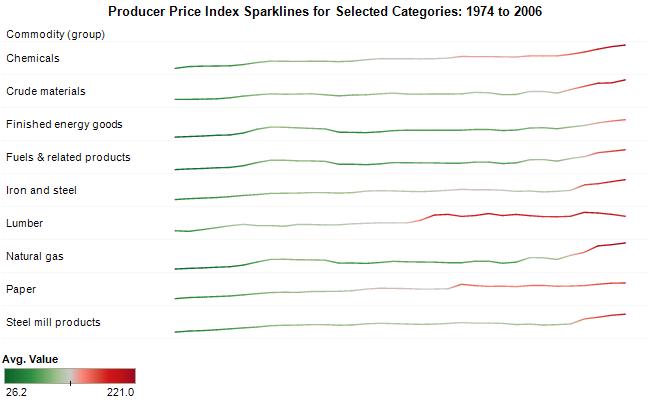